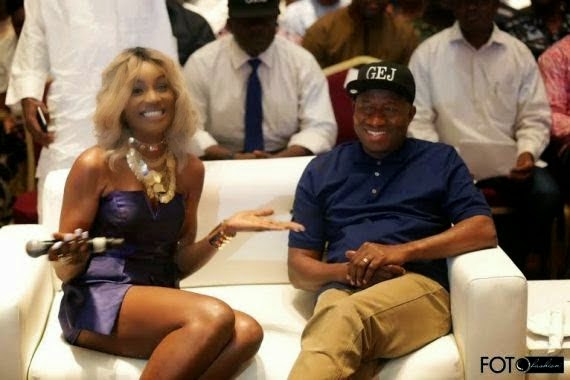 The  “White Lies” hitmaker in an interview with Punch addresses the issues concerning the dress she wore when she was interviewing the President of Nigeria , Goodluck Ebele Jonathan.

she said she had no intentions of seducing Mr President. she also said she was on that dress because she used it to perform on stage. read excepts from Punch News Paper Below..

“I am a very respectable young lady and I was not in any way trying to
seduce the President with the outfit I wore. I had two outfits for the
event, one was for my performance and the other was worn after I
performed.

The dress I was pictured in with the President was what I
wore during my performance. I came on stage and greeted everyone
according to their culture and I did the same for Mr. President. He was
impressed and he asked where and how I knew how to greet in his native
dialect and I said I learnt it.

That was what brought about the giggling
and smiles in the picture. I’m a performer and what I do on stage
doesn’t reflect my everyday life. I had two outfits on that day and it
was a youth event. Who wouldn’t feel overwhelmed meeting the President?
Well, I did and I felt honoured because it is not every day you get to
meet the president of your country,” she told Punch.