There was only one fight, they called it the ”fight of the century” Why?
its simple it was the most expensive boxing fight of all time. i mean $400 million aren’t a joke.

it was even tagged Money, maypac and so many other names.

With his victory, Mayweather also cemented his status as the greatest pound-for-pound boxer of his generation.

The five-weight world champion is now undefeated in 48 professional fights, stretching back 19 years. 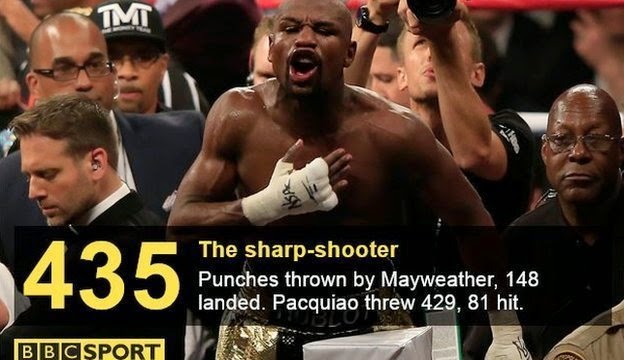 Violette - September 5, 2021 0
Controversial cross-dresser James Brown has got top personalities in the entertainment industry talking at the premiere of Toyin Abraham’s movie as she stuns out...

Wizkid and I are cool, People Just Kill Themselves Online For Nothing Sake –...

Violette - November 30, 2019 0
DMW Boss, Davido has stated that the relationship between him and Wizkid is cool as he notes that they do not hold any grudges...

TBoss lashes out at Nigerian hair stylists for Touching her Hair

Johnson Olumide - September 15, 2018 0
Nigerian hair stylists now have a full Insta-story call out post dedicated to them by Big Brother Naija reality show star, TBoss. According to TBoss, it is rude...

Cee-c goes braless as she wows In Super Chic Photos

Johnson Olumide - March 21, 2020 0
The BBNaija Ex housemate, Cynthia Nwadiora known as Cee-C wows in breath-taking, enthralling and mouth-watering photos. She stormed us again, as she gorgeously stuns in...

Violette - December 5, 2019 0
Media Personality, Daddy Freeze has advised Nigerians to stop being delusional over claims that Anthony Joshua is a citizen of the country. Daddy Freeze made...