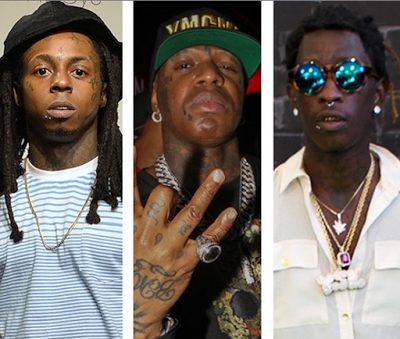 In case you are reading then you must know there is war in  the United States of America.


Lol i didn’t mean national war, am sure you must be wondering what kind of war is going on or what kinda of war am i refereeing to?

its simple, no need for rocket science here, its a war in the Music Industry in America between the Young Money versus Cash money label. which are owned by Lil Wayne and Birdman respectively.

News as emerged that Birdman(Cash Money) and his artist Young Thug had made plans to assassinate  Lil Wayne Back in April when his Bus Tour was attacked. it was claimed that the attack was carried out by the bloods  Gang.

Channel 2 Action News has uncovered an indictment filed in Cobb County in June that alleges Williams and another rapper named Bryan Williams, aka Birdman, were involved in a RICO conspiracy to kill Lil Wayne when his tour bus was shot up in April. The indictment also says all of the men are members of the Bloods gang.

Lil Wayne later dismissed the lawsuit “due to venue issues while problems continued between (Lil Wayne) and (Birdman).”

The indictment alleges that Young Thug made a threat against Lil Wayne and tour bus shooting suspect Jimmy Winfrey carried out that threat.

Winfrey is also known as “PeeWee Roscoe” and affiliated with Rich Gang. Birdman is a part of the Rich Gang rap group which was formed by Cash Money Records in 2013.

The indictment goes on to say that Winfrey was driving the white Chevy Camaro that fired shots at Lil Wayne’s tour buses the night of April 26 after a police escort left the buses.

“After Atlanta Police discontinued their escort, (Winfrey) and fellow Blood Gang members entered Interstate 285 from Atlanta Road in Cobb County in pursuit of the buses occupied by (Lil Wayne’s) group,” the indictment says. “(That’s when) the white sports car pulled beside the buses, shots were then fired into the buses from the sports car with a .40 caliber handgun and a 9mm handgun.”

The indictment goes on to say Winfrey had a photo of the Camaro posted on his Instagram account and attempted to erase it following the shooting. The Camaro was later found at the home of one of Winfrey’s relatives.

Young Thug and Birdman have not been charged in the incident.

Winfrey’s next court appearance is Friday