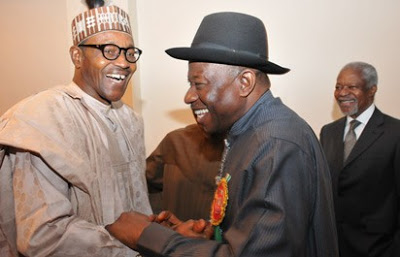 According to the Punch News paper, Ex-president GEJ was at the Aso Rock on Saturday Night and according to their Respondents,GEJ came in at night and went straight to the Villa  to meet with President Buhari.

Femi Adesina, the Special Adviser to the President on Media and Publicity confirmed Jonathan’s visit and meeting with Buhari to Punch correspondents on Sunday. He however disclosed that he was not privy to the subject of discussion at the meeting.

A top Presidency official apparently also talked to the Punch correspondent who said that the meeting was strictly between Buhari and Jonathan.

He said that the visit was so private that no photographs were taken. According to the official: “Nobody was with them. I am sure they don’t want the visit to be an item in the media.

That probably explains why the former president visited at night and went straight to the residence. They met for a few minutes in the President’s residence.”

According to reports, president Buhari also hosted ex-president Olusegun Obasanjo the following day after Jonathan’s visit. However, unlike Jonathan’s visit, one of the photographers who was with the President was able to capture the two leaders.

Johnson Olumide - May 29, 2018 0
Happy wedding anniversary, Toolz! Today, the famous OAP took to her Instagram to share a collage of her wedding photos with her husband Tunde Demuren,...

Johnson Olumide - December 20, 2019 0
Our For You Crooner, Kiss Daniel just signed two new artists to his record label Fly Boi Inc. After the release of his album tracklist...

Violette - November 20, 2019 0
Tacha is in the news again as some set of Nigerians have noted she deceived the social media world for her video call with...

Violette - November 10, 2019 0
Reality Star, Mike is not leaving any stone unturned as he plans to launch his own footwear collections. Ike who came second at the just...

Munakur Jantiku - October 6, 2019 0
Disqualified Big Brother Naija 2019 Pepper Dem Housemate Tacha, has come out to say what she could have done differently in the the House...