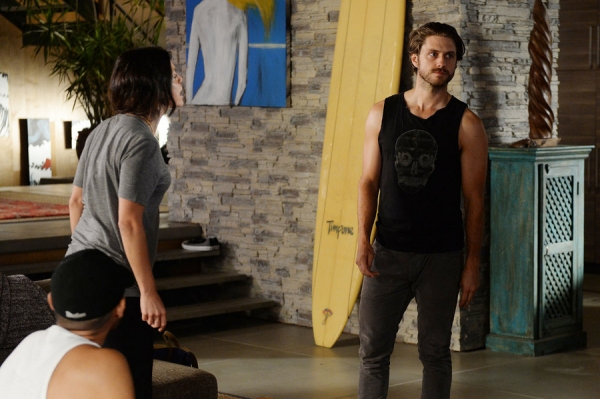 Graceland Episode 7 of season three went on air last night in the united States, and there where quit a few surprises.

like Mike waking up to reality that he had been away from home for two days due to the drugs Gusti’s Wife was giving him.
ALSO READ:

Bankrupt for Real? 50 Cent desperately seeking to rent out his mansion

on the  other hand Amber nearly lost  her life was an under cover agent in Florida.

Charlie (Vanessa Ferlito) meets with Amber (Brit Morgan), who wants to stay out and become a criminal informant. Then Charlie reveals how she snitched against her mobster father to the FBI, in order to save him. She has to send Amber back, but it’s not personal.
Elsewhere, Mike is talking to Gusti Vin (Mahedi Rakib)’s wife, who only sees herself as an amputee. Gusti’s wife then offers Mike her own drugs. Back at Graceland, Paige (Serinda Swan) is talking to Briggs about how to take down Ari and the Sarkissians. They need Johnny (Manny Montana) and Dale Jakes (Brandon Jay McLaren) on their plan, but the two are reluctant to join them.
Paul meets with Ari Adamian (Rhys Coiro) and gets hold hostage. After Toros (Val Lauren) gives him a beating, Paul has two buyers who want to make a deal with them. While Amber and Charlie make their oxy deal, Johnny shows up as his cover to make an arms deal. After a standoff, Toros backs away and promises to bring in the the heavy artillery.
To show she’s a slut, Paige needs a hickey on her neck. Charlie asks about Mike but Paul can’t get in contact with him. Gusti’s wife looks over the drawings that Mike saw when he flatlined. After checking his cell, Mike realizes he’s been away for two days because of her drugs.
Knowing the artillery is his, Toros knows he will be king and wants Paige by his side. Mike returns home to a drug intervention. Noticing his hands shaking, Paul asks Mike to stop using. After being called a junkie, Paul knows Mike will get the shakes and sweats.
Mike then picks a fight with everyone in the room and finally leaves. After packing up his things, Charlie pays Mike a visit. After looking at Charlie, Mike breaks down and reveals he’s in a lot of pain. Charlie then confesses to Mike that she’s still pregnant and that Paul doesn’t know.
After making her flight, Amber and Charlie are having fun at a campfire with their dealers. Knowing her drink has been spiked, Charlie is unable to stand. Stuck on the couch, Amber saves Charlie from getting shot.
Unfortunately, the dealers know that Charlie is pregnant and they need to get rid of her. With a pile of money stashed together, Amber is hesitant to make a decision. After being dumped in the swamps, Charlie hallucinates about a boy before Amber drags her back to the surface. Charlie spits out the water and jumps back to life.
Dale and Johnny are ready to make arrests at the buy. When Paul realizes he was being played, the FBI suddenly show up at the buy.
During the night, Mike tells Gusti’s wife that they have a problem. Telling her she can quit and is stronger, Mike though gives in to temptation and succumbs to his addiction. Lying on the floor naked, Charlie feels she lost her baby. Amber holds Charlie as she wishes she had more time with her boy.
Paul realizes Toros and Ari are going to walk; Paige thigh is still under cover. Paul then gets into Ari’s car after he is approached by the two in an alley.
Readers, what did you think of Bon Voyage?

Johnson Olumide - May 12, 2020 0
The two Rappers have been under the same music record and label for years and over the years the chemistry between this two cant...

Violette - November 29, 2020 0
The death of soccer legend Diego Maradona has now triggered a criminal investigation, and his personal doctor appears to be in the crosshairs of...

I had the most peace when I went off social media — Actress Adesua...

Violette - September 22, 2020 0
Veteran Nollywood actress, Adesua Etomi have revealed the most peaceful time she has had in the past few years noting that it was when...

Violette - July 1, 2020 0
The leg work and Zanku dancer, Poco Lee is in the news today and it is about a used condom. And everyone has been talking about...

Johnson Olumide - December 20, 2019 0
Big news from the Triple MG camp suggests that their flagship artiste/producer, Tekno have scored himself his first international collaboration. According to reports, Tekno...