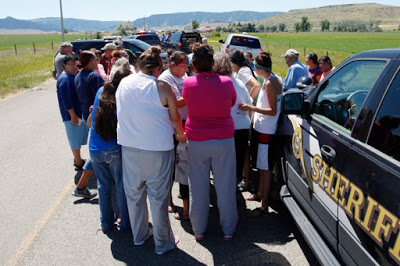 Jason Shane, 51, and Tana Shane, 47, died in the Wednesday shooting in the small town of Pryor, FBI spokesman Todd Palmer said.
Their daughter, 26-year-old Jorah Shane, was shot in
the back when she tried to run away, and she is recovering in a Billings
hospital, said the woman’s aunt, Ada Shane.

The statement by Special Agent Larry McGrail II was filed in US District
Court seeking a murder warrant for Jesus Deniz, also known as Jesus
Deniz Mendoza, of Worland, Wyoming.


2 FBI agents interviewed Deniz on Wednesday, and Deniz acknowledged
shooting 3 people with a .22-caliber rifle and then driving away in
their car, McGrail’s statement said.


“Deniz told the interviewing agents that he shot the victims because he
was getting tired of waiting around, and because the daughter had
laughed at him,” the statement said. 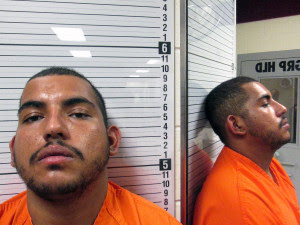 Deniz is being held in Park County, Wyoming, after police arrested him
near Meeteetse, about 120 miles from Pryor. A judge’s signed warrant
would begin the process of returning Deniz to Montana to face charges in
the killings.

Jorah Shane recounted to her relatives the events leading to the shooting.

She said her mother, Tana, drove by a young man parked on the side of
the road who told her he had run out of fuel, Ada Shane said.


“He’s only 18, and he looked like an innocent boy,” Ada Shane said. “Both my brother and sister-in-law have big hearts.”

Tana Shane went by her house, picked up her husband and daughter, and
they drove back to the stranded car, Ada Shane said. The man pulled a
gun and held it to the temple of 51-year-old Jason Shane.

He ordered the father to stop the car and told everybody to get out, Ada
Shane said. He told the family to give him their money, but the family
said they had only change because they recently returned from a
religious revival in Window Rock, Arizona.

The man told the family to start walking. Tana Shane told her daughter
in their Native American language to run. Jorah Shane told her aunt that
she heard a shot, started running, then heard bullets whizzing by her
head. She fell, heard another shot, and started running again toward a
church just as a car was pulling out.

She ran to the car, and the frightened driver leaped out, Ada Shane said.

Jorah Shane jumped in the driver’s seat and drove to her house with the shooter still firing at her, the aunt said.

McGrail’s statement largely confirmed the account by Ada Shane, though
it did not name the victims and it said the driver who stopped near the
church got out of the car to check on the woman’s parents.

Jorah Shane was later hospitalized. A bullet had grazed her head and she
had a gunshot wound to the back. She didn’t know as of Thursday that
her parents had been killed in the shooting, Ada Shane said.


“Last night before she went in, she told everyone to go look for her mom, she’s hiding in the field,” Ada Shane said.

The aunt said relatives have kept the hospital room’s television off and she doesn’t know how they will break the news to her.
Palmer, the FBI spokesman, declined to identify Jorah Shane as the
wounded person, saying the FBI does not provide information about
potential witnesses.

It is not clear whether Deniz has an attorney. Park County court officials said a hearing had not been set for Deniz.