This year has been the Best so far for Social Media, as it all Began In Nigeria Via Olamide and Don Jazzy War of Words from the Headies, that took Africa’s Richest man Aliko Dangote to Cool Off.

And Now ist live in America,Kanye West and Wiz Khalifa both whom have dated same ex Stripper Amber Rose, while the Latter fathers a child with her.
They both came for each other on twitter as they exchange Hash word, first it was Wiz Khalifa whom threw Spanner into the Wheels, as he comment on Kanye changing his yet to be released Album for ‘Swish’ to ‘Wave’.

Wiz Tweeted Please don’t take the wave,” he tweeted, following it up with a series of tweets alluding to the album.

At First, Kane didn’t say Shi***t about it until Yesterday when He Felt WIz Overdone it by throwing shades at his wife, Kim Kardashian, when Khalifa tweeted again and said “Hit this kk and become yourself,” on Wednesday Morning.

Hours later Kanye got Enraged and went full blown on Wiz Khalifa, saying he
got trapped by a stripper, Amber Rose.

And The Drama went for the whole of Yesterday, so just as the Midnight was setting in the United States, Former Stripper comes for Kanye adding Salt to the Injury, by saying he sent her his naked pics.

read her Tweets Below: 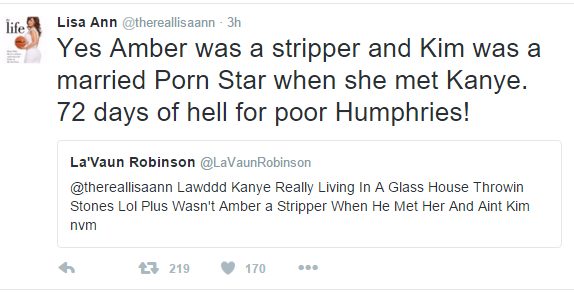