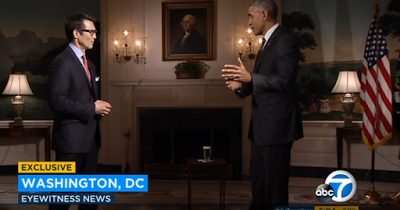 Obama in an Exclusive  one-on-one interview with ABC7’s David Ono, of which the President Personally Invited Ono to meet with him in the Diplomatic Reception Room of the White House on Wednesday.

The COnversation was about the Diversity in the American Film Industry popularly called Hollywood.

Omg!!!! Gigi Hadid Without Pants at the Oscar After Party

There Has been so much Controversy about the Oscar Awards NOmination list that was released two weeks ago, of which for the second consecutive Year featured no Black Actor or Actress.

In the Light of this Event, the OScars has Been Deemed ‘White Oscars’ by Social Media and Celebrities and people from different works of life.

The United States President as over time,again and again Emphasised on the need to  pushing the country towards a better understanding of its differences with a theme of tolerance and inclusion. It’s the same theme Hollywood is grappling with in regards to the Oscars.