The World No 1 in the Female category of Tennis Player Soared unto the 2016 Australian Open Final Earlier today in Melbourne,as she dismantled 5th seeded Agnieszka Radwanska at the Rod Lave Arena at Melbourne Park.

The 21 time Grand Slam Winner defeated Agnieszka Radwanska 6-0, 6-4.
The win takes her into her seventh Aussie open final in over two decades now.

In her 21 time Grand Slams , she has won six Aussie Open and has never lost in the final for a while now.

Williams Said during post match conference that “I was really hitting just all the right shots, making little to no errors, which is kind of hard to play like that,” she said.

Serena Williams, 34,  will be playing against german Angelique Kerber in the final on Saturday.

Kerber made it to the final on Saturday as brushed past  Johanna Konta in the second semifinal, has lost five of six career matches against Williams.

Rita Ora poses Nude, as she Displays her naked boobs and orange nipples for Lui magazine

kerber said “Actually I’m really looking forward to playing against Serena in the final,” Kerber said in an on-court interview. “It’s just amazing to play against No. 1 in the world in the first Grand Slam final of the year.”

Williams Also added that while she was on court playing she had this thoughts “I feel like I’m in the semis, only one more match to go, that’s how I think,” Williams said. “I may as well give it my all.”

She has not lost to a top 5 player at the Aussie Open since 2008, where she fell short to fourth-ranked Jelena Jankovic in the quarterfinals.

History would be made and records would be equalled on Saturday, should williams win her 22nd Grand Slam title to equal one of the greatest in the Sport, Steffi Graff who had 22 grand slam in her career.

In her interview she was asked the Question:

“I definitely block it out,” Williams said. Alluding to the United States Open, she said, “I was one off last year, too. If I don’t win on Saturday, I’ll still be one off.”

At the United States Open, Williams added, “I was so stressed out. I don’t want to relive that at all.” 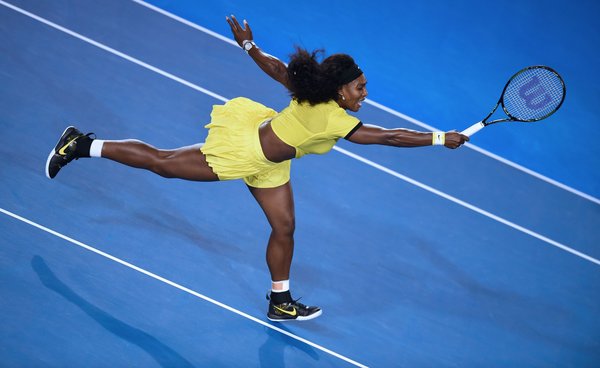