The Us Singer and mother of one was among the many music celebrities that attended the 58th Annual Grammy Awards in California, United States.

She stunned and left people open mouthed as she wore a Risque dress on the Red Carpet showing of side boobs without no bra nor underwear in a very daring  black and white Scarf Dress.

Ciara was accompanied by her new Sea hawk’s Quarter back Boyfriend Russell Wilson. 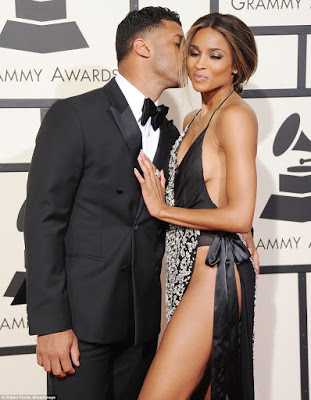 Tems reportedly set for another collaboration with American singer, Drake

“I was wrong, find it in your heart to forgive me” – Bobrisky tenders public apology to Tonto Dikeh

Johnson Olumide - July 15, 2019 0
The UK Gay Activist whom made Headlines Throughout the year 2016, is back again with some Harsh and Heartless word via social Media demanding of Nigerian Celebrities to...

Johnson Olumide - September 14, 2018 0
Sense or Nonsense: "Not Eating P*ssy Is Really Childish" - Lady Says A slay queen has decided to cause uproar with her tweet. @CallMeKada posted on her...

Kemi Olunloyo Converts to Islam says she is tired of Christianity that brought her...

Violette - July 2, 2019 0
Controversial Nigerian Investigative journalist, Kemi Olunloyo has revealed on social media that she is now a Muslim. See her posts below: I’m converting to #Islam soon. My...

Adedokun Moses - November 25, 2020 0
Another drama is set to evolve in the music industry as afrobeat singer and songwriter, Burna Boy subtly shades Davido whom many have regarded...