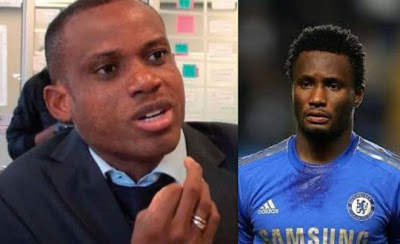 The Current Super Eagles of Nigeria Coach Sunday Oliseh has warned John Mikel Obi that he risk losing his spot in the nation’s national team as a result of him playing the role of a play maker for the national team  while at the club Level he plays as a defensive midfielder and excelled in it.

The Chelsea player has seen his career take a big resurgence this season  playing as a Defensive midfielder and also going on to score his first champions League goal.

Under Coach Siasia, Mikel Played the defensive role that shot him into limelight at the 2005 Fifa U20  World Cup in the Netherlands.

“With the national team, it’s not what you want that matters, it is what will bring us results,”said Oliseh in a radio interview. “If you don’t want to do that, I will play players who want to help us, like I did against Swaziland. My personal opinion is that he should be given a more central defensive role, like (Guus) Hiddink is using him. He should be the umbrella for the two central defenders,” Oliseh said.
READ ALSO
Please Don't Judge Me – Victoria Kimani says as she Flaunts Cleavage

How Uganda brought me closer to Tems – Omah Lay opens up in new...

Violette - January 19, 2021 0
Fast-rising Nigerian singer and songwriter Omah Lay has opened up on the relationship between him and Tems as well as how their Uganda experience...

#BBNaija: Ifu Ennada replies a troll who blasted her for commenting on Alex’s cultural...

Violette - May 22, 2018 0
Former BBNaija 2018 contestant, Ifu Ennada has been slammed by a troll after she commented on a cultural photo Alex posted recently. The ex-housemate was...

Violette - November 19, 2019 0
Beauty is one thing but showcasing it on the big stage is what really matters. Reality Star, Diane is not coming short of any of...

Violette - May 12, 2020 0
The wedding bells will soon ring. We’re hoping to see Chef Chioma address herself as Chioma Adeleke, latest by the first quarter of 2020....

Johnson Olumide - February 18, 2020 0
The Two nollywood actresses are very close friends which comes as a surprise though with the competition for Acting roles between the two star studded actress...