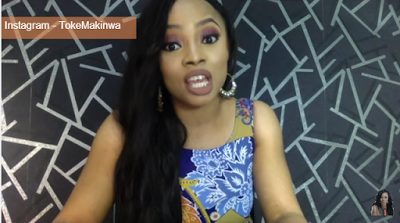 The Sexy Toke Addressed issues about side chic stealing or trying to steal  guys from their girlfriend and reasons why its not fresh to date a guy who already has a girlfriend.

Toke was also of the Opinion that once a man has not married a lady she is just a girlfriend and still an open market which is presumed by many women is a wrong ideology.

Toke herself has been a victim of Side chic drama that nearly tore apart her world last year after getting to the man of heart in Majid. she said:
SCROLL DOWN FOR VIDEO

“If you know a guy has a babe, respect the relationship because you would want someone to respect yours as well. You don’t have to be best friends. If you know of someone and you know the person is in a relationship, respect her relationship. I don’t believe in giving your number to a guy that is seeing somebody else a chance.

I am sorry the moment you tell me you have a girlfriend,nothing can make me look at you twice. In my mind I am think”if you have a girlfriend what are you doing here? Some people are like so ”do you want us to remain single?” I feel like this is what adds to the drama females have in their lives because it’s not as straightforward as it should be.


The more you hear people give advice like “Ah there are no men out there oh! If he is toasting you you better just say Yes! So what if he has a girlfriend, after all, its not as if he is not married to her. They have something and what they have, is leading somewhere before you the homewrecker, boyfriend snatcher ,the man thief decided to shine your eye”