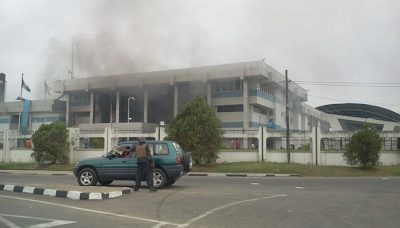 Official Statement from Acting Corporate Affairs Director of CBN , Issac Okoroafor told the Press the Explosion was not Terrorism affiliated rather the Tragedy occurred as a result of Gas Explosion that occurred from an Air Conditional that was undergoing refurbishment.

Currently as it stands now about two  people had unfortunately lost their lives, they the construction worker and a staff of the CBN while many others sustained Injuries of Various Degrees.

READ HIS STATEMENT BELOW:

“The fire, which broke out at about 12 noon in the banking hall of the premises, was apparently caused by a gas explosion from the air conditioners in the building which was undergoing some refurbishment at the moment.

As soon as the incident occurred, the CBN emergency alert system was activated, the Fire Service was called in, and the fire was immediately brought under control.


Following the explosion and fire, about twenty five (25) persons sustained various levels of injury, and are currently receiving treatment at hospitals in Calabar. Four of the injured have been discharged.


We are, however, very saddened to confirm that two of the critically injured, a CBN staff and a construction worker, have died at the hospital. We are now working with the bereaved families to determine next steps”, Okoroafor said.The police had given a lower figure of 20 persons being injured, two of them in critical conditions.


The Commissioner of Police in Cross River, Mr Henry Fadairo said that the explosion, which caused panic in the state capital, was not a bomb blast as speculated.

Johnson Olumide - March 21, 2020 0
Media personality, Ebuka Obi-Uchendu and his wife, Cynthia are expecting their second child. The couple got married in 2016 and have a daughter, Jeweluchi. Here are...

Violette - May 12, 2020 0
A man is facing charges for selling counterfeit opioid drugs to Mac Miller a few days before the rapper’s death which resulted as a...