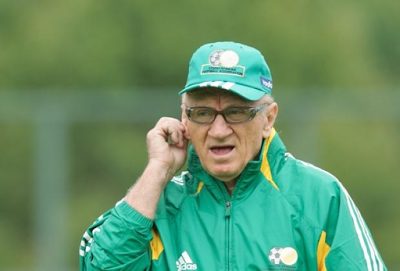 The Ex South Africa National Team coach Legend Ted Dumitru ,76 has passed away.
The Announcement was made yesterday afternoon that the former orlando Pirates, Kaizer Chiefs, Mamelodi Sundowns and bafana mentor died of a heart Attack after he collapsed at eastgate Shopping mall in Jonannesburg in the early hours of Thursday, May 26th 2016.

Theodore Dumitru aka “Ted”was a football manager who last worked as a technical director for Mamelodi Sundowns in the South African Premier Soccer League. He was the former coach of the South Africa national football team.

He led Bafana Bafana at the 2006 CAF Africa Cup of Nations tournament in Egypt, where the national team were eliminated in the group stages.

May his soul Rest In Peace!! Amen.
READ ALSO
Linda Ikeji's sister Laura Ikeji back at the gym after delivery (Video)

IF YOU NO LIKE SKALES GO & DIE – Skales Says as He enjoys...

Access To Wealth Does Not Guarantee Happiness Or Peace Of Mind – Billionaire Daughter,...

Johnson Olumide - January 28, 2022 0
Billionaire's daughter and famous Disk Jockey, Florence Otedola aka DJ Cuppy in a new post tells her fans that having access to wealth does...

FUCK IT AM DROPPING RISKY TOMORROW- David in New post

Violette - November 10, 2019 0
Latest Dad Davido who is currently still a main gist in town after he and his Engaged Girlfriend, Chioma welcomed a bouncing baby boy...