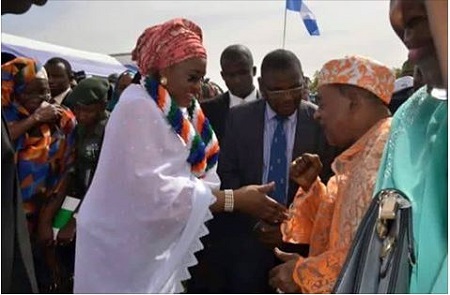 The First Lady of Republic of Nigeria Mrs Aisha Buhari was at an event recently with Oyo state King, known as Lamidi Olayiwola Adeyemi III, 77 and she wanted to great the elderly Oyo Yourba Leader with a Hand shake  of which the wise King smartly Ignored and replied with a Fist Pump.

Culture in Yoruba land has it that you knee as a woman to greet someone far older than you as a sign of Respect and in this Case what  Aisha Buhari did was a sign of disrespect to the public eye.

Seyi Law, First Lady of Lagos State,Tonye Cole, , others step out for the launch of Inspaya Original Documentary Series

Her action has attracted a hot debate on the social Media.

Lamidi Olayiwola Adeyemi III (born 15 October 1938) is the Alaafin, or traditional ruler, of the Yoruba state of Oyo and righful heir to the throne of its historic empire.

Lamidi’s father, the Alaafin of Oyo Oba Adeyemi II Adeniran, was deposed and exiled in 1954 for sympathizing with the National Council of Nigerian Citizens (NCNC).