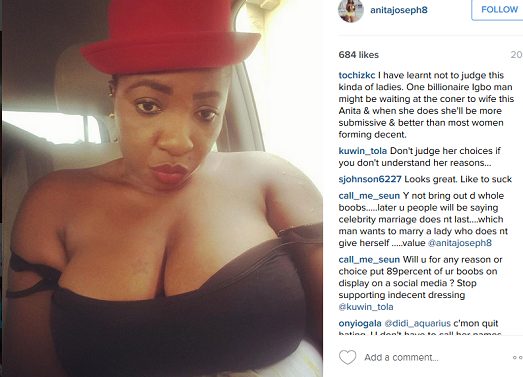 Anita said they should just stop Pretending and just chill,responding to her recent photo on Instagram that showed the actress’s frontal busty assets, she said its just a normal Photo and people need to take a chill pill.

“I did not post the picture to tease men. I took that picture December 2015 while I was filming at Lekki. The weather was very hot, so I decided to take the picture. I was very tired that day and you can see it on my face. One day, I innocently uploaded it and by the time I checked my phone again, I had so many messages.  Continue…

I got calls from my friends; some liked it and others did not. At first, I wanted to remove it but when I saw all the comments, both positive and negative, I decided to leave the picture. As far as you don’t pay my bills, you have no right to tell me what to do. Only one man will tell me to take the picture down and I will because he pays my bills. He is the one to be obeyed,” she said.