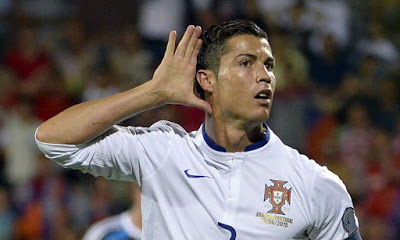 The Real Madrid Striker who has been with the Spanish Side since 2009 after been Purchased for $80 Million from Manchester united said in her interview this week that if he was to rate himself among top players in the last twenty years and thinking positively about what his been able to achieve he did say his the best among the lot.

Ronaldo just won the Uefa Champions League for the 3rd time in his already trophy Laden career and his second with real Madrid in the last 3 years.

He is Also Favorite to win a 4th Balon D’ Or come January next year.

“Where would I rate myself amongst the top players of the last twenty years? Thinking positively, then I believe with what I’ve achieved, I’m the best of the lot.”

Ronaldo is on international duty with Portugal ahead of their Euro 2016 opener against Iceland on Tuesday, and says he is “proud” to be an “inspiration” to Portuguese people.

“I feel like I’m a citizen of the world, but also a Portuguese man who loves where he comes from and is proud to represent my country at the highest level. After Euro 2004 I’ve felt responsible for being part of this great generation. I know a lot of boys and girls look up to me today as an inspiration.”

The 31-year-old would be looking to take his country to glory at the 2016 Euro holding in France.