Home News Dino Melaye : ‘I will be the president of Nigeria one... 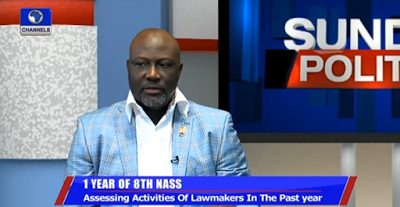 he said in his interview that he will some day be the President of Nigeria. One Hell of a Statement if you ask me.


“I will say that the leadership of the senate under Senator Bukola Saraki has done brilliantly well but we would have done better if not for this planted distractions by people who are ambitious, people who do not want to accept defeat because everyone is ambitious. I am ambitious. Like I want to be the President of the Federal Republic of Nigeria. It shouldn’t be a crime”he said

When quizzed about his seriousness about his ambition, Dino said ” I will be”

When he was asked when this will happen, he said “When we get to that bridge we will cross it”.