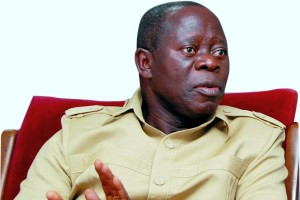 The Outspoken Current Governor of Edo state and former Nigerian Labor Congress Leader shared his thoughts on the Opposition Party. PDP saying ‘PDP is not an issue… they are lighter than a loaf of bread’

he made this statement ahead of the September 10, 2016 governorship election in Edo State.

Oshiomole said the Pdp are nothing to worry about, as the APC would be focusing its attention on other political parties whom are looking to unseat APC as the ruling party in the state for the last four years and further stated that PDP is currently in Crisis  riden.

He said the party will soon embark on its campaign now that the party delegates have chosen a flag bearer, Godwin Obaseki.

“Our delegates have spoken, now the party will hit the ground running. There is no PDP in Edo state. Which of the factions, we have one body several heads, even when they were in Federal we defeated them with all their Federal might. So there is no PDP as long as I am concerned.”


“For me they are lighter than a loaf of bread. But we will go to the election, there are other parties in the state. PDP is not an issue, I don’t think Edo people will forget the crime of PDP in a hurry.”
“Not for the next twenty years in this state. Even when you ask young boys and girls in the state, who is responsible for this bad school they say PDP.”


“Even children knows that by the time they become 18 they will continue to vote APC and vote against PDP. We have no fear at all, infact we will do better in the next election and kick them out of existence.”