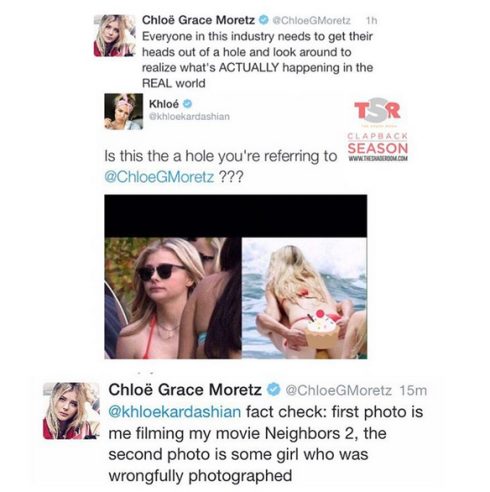 This New found Feud between the Kardashian Ladies and this Pretty  hot Brunette Teenage actress called Chloe is some what becoming more and more interesting.

First it was Kim she was taking a troll on after she released a nude Photo of herself on Instagram some months ago.

Today its Khloe and its not been funny at all, and every time the Kardashian throws a stone at her, she responds back with like five stones.

She just never losses to them, in this latest feud, the 18-year-old posted a photo on her social media and captioned it with a message, this prompted the attention of Khloe after Kim K has shared a Video claiming that Taylor Swift Knew about the Kanye Lyrics. so Khloe shared a pic of what she thought was the actress on set asking her if that’s the hole she was talking about and my word she gave her one of the coolest yet insulting answer.
READ ALSO
Music: Wande Coal – Maradona (Cover)