Home News Serena Williams Sweeps aside Annika Beck, 6-3,6-0 to advance to the quarter...

The No 1 seeded and world no 1 made short of her work as she out to swords her uninspiring opponent in the 3 round of Wimbledon 2016.

The 34-year old wasn’t going to let the let up in game 2 that nearly put her on the Brink of an Upset and defeat in the second round as she lost the first set in a Tie Breaker but rallied her way back in the second and third set to take home the win.

Today was rather different as she simply was clinical in all front, still not at her best as she committed 14 unforced errors that gave Annika Beck some chance to win 3 games, but despite that she took the first Set 6-3, and by the 2nd set it was no margin for error as she swept her opponent 6-0 wining the game with an ace serve.

Serena Williams, then, would surely provide a safe pair of hands on Centre Court. The defending champion, the No.1 seed, the No.1 player in the world – Serena would be our rock.
Sure enough, she delivered a 6-3, 6-0 win over Annika Beck to record her 300th Grand Slam match win on the eve of her 300th week as the world No.1. And when a gentleman with a microphone pointed this fact out to her, Serena was stunned. “Cool!” she gushed. “Nice. That’s awesome. That’s a lot of matches.” 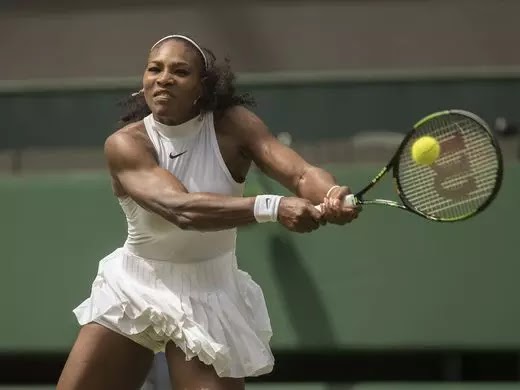 Even so, Serena has not been having it all her own way of late. The Misses Kerber and Muguruza beat her in the finals of the Australian and French Opens respectively. Victoria Azarenka added to the misery beating her in the final in Indian Wells and it was not until May that she finally got her hands on a trophy (it was in Rome and she beat Madison Keys to collect it).
Serena Williams third round press conference
Even here, she has looked a little shaky on occasion and dropping a set to Christina McHale did little to settle the nerves. But fortunately for the defending champion, Beck, the world No.43 from Germany, never really looked likely to cause an upset.

Small – by tennis standards – at 5ft 7in, Beck is fleet of foot and a nimble mover. Her game is neat and tidy but she does not have any great weapon. True: speed was one of Lleyton Hewitt’s greatest weapons but even he found that it could only take him so far against the power houses of the game. And Beck was taking on the juggernaut of women’s tennis in Serena. 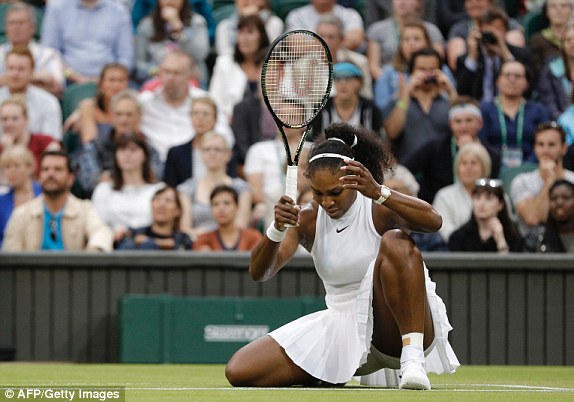 And before anyone complains, by juggernaut we do not mean a 16-wheeler; we mean “a huge, powerful, and overwhelming force” as defined by the dictionary.

As is so often the case in these matches, everything depended on Serena. The points that Beck was winning in the first set were, for the most part earned on the back of a Serena error (14 in the first set and none in the second).


But once the top seed had loosened up, settled her nerves (yes, even serial champions still get the odd butterfly flapping around in the tum) and cut out the mistakes, Beck did not stand a chance.

Serena did not drop a point on serve on the second set and only allowed Beck to win four points in total during those last six games as she swept to victory.

Now, though, life gets more complicated. In the fourth round, she must find a way to get past Svetlana Kuznetsova. The 31-year-old Russian was on the brink of defeat against Sloane Stephens but dragged herself back to win 6-7(1), 6-2, 8-6.

She was happy to argue her case until the cows came home but it made no difference.

2016, Middle Sunday Highlights, Svetlana Kuznetsova vs Sloane Stephens
Still, it may just have sparked the competitive fire in her as she ran away with the second set and then hung on by her fingernails as Stephens served for the match at 5-3 in the third.

That storm weathered, the former French and US Open champion hung on for dear life, broke for a 7-6 lead, fended off a break point and then finally, after two-and-a-half hours, converted her first match point.

Stronger than Beck, with more weapons than Beck and far, far more experienced than Beck, Kuznetsova could be just the sort of foe Serena does not want to see on the other side of the net. Particularly when she has not had a day off to do her laundry.