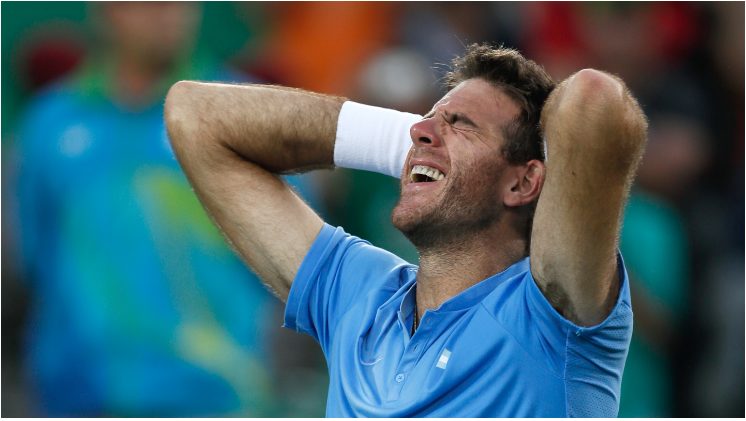 The 27-year-old Tennis Player had been in fine form of late since the French Open all the way to  Wimbledon Last Month and So far so Good He has Defeated every Top 5 Player in the Men’s Tennis Including World No 1 Djokovic in the First Round at Rio Olympic.

And Just Last  Night He Defeated another Top 5 Ranked Player Raphael Nadal 5-7, 6-4, 7-6 (5) in a 3 hour Trilling Encounter.
According to AP:
RIO DE JANEIRO (AP) — Juan Martin del Potro ended Rafael Nadal‘s bid for an unprecedented second Olympic singles gold medal in a thrill-a-minute semifinal, then celebrated as if the title were already his, kneeling to kiss the court before leaping into the stands. 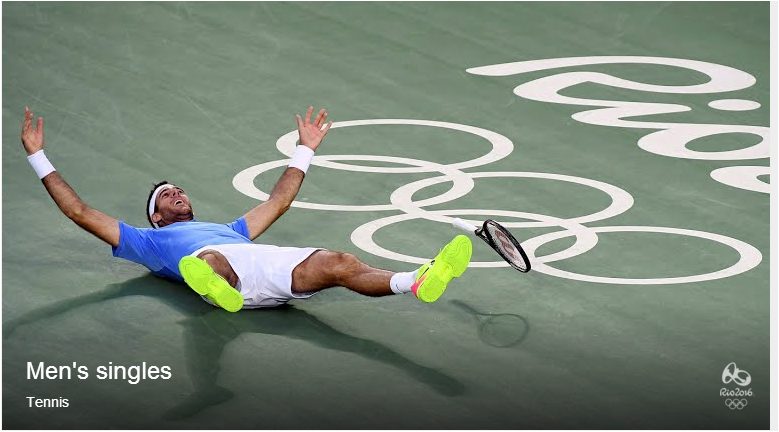 Del Potro, who earned a bronze for Argentina four years ago, will add a silver or gold to that after advancing to the Rio de Janeiro Games final by coming back to stun 2008 champion Nadal 5-7, 6-4, 7-6 (5) in more than 3 hours Saturday.
“Both of us,” Nadal said, “played a very high level.”
Using the same ferocious forehands that carried him past No. 1 Novak Djokovic in the first round a week ago, 2009 U.S. Open champion del Potro now will try to pull off a third surprise on Sunday, when he meets defending champion Andy Murray in the best-of-five-set final.
“It means something very, very big in my career. It would be the same as the U.S. Open. Maybe even better,” said del Potro, who’s fallen to 141st in the rankings after three operations on his left wrist, which he uses for a two-handed backhand.
“I didn’t expect to reach the final, beating Djokovic and Rafa,” del Potro said, “but I did, and I get a medal, and it’s amazing for me.”
The No. 2-seeded Murray earned a gold in singles and a silver in mixed doubles for Britain at the 2012 London Games.
“He’s the favorite for sure,” del Potro said. “Hopefully I can run like I did today.”
No tennis player has won two Olympic singles golds, let alone two in a row, as Murray is attempting to achieve.
“It would mean a lot, obviously,” Murray said after beating fourth-seeded Kei Nishikori of Japan 6-1, 6-4 to stretch his winning streak to a career-high-tying 17 matches. “It’s obviously not an easy thing to do. That’s why it’s not been done before.”
Standing in Murray’s way now will be del Potro, whose wrist problems forced him to miss 2½ years’ worth of Grand Slam tournaments.
He showed signs of his resurgence by beating two-time major title winner Stan Wawrinka at Wimbledon in June, then used all of his 6-foot-6 frame to produce intimidating forehand after forehand that Djokovic couldn’t fend off. That same formula worked against Nadal, with 18 of del Potro’s 19 groundstroke winners coming off his preferred wing.
It’s been a tough road for del Potro, who got down on his back, spread-eagle, near the Olympic logo in the main stadium after the semifinal ended with Nadal sailing a forehand wide. Moments later, del Potro planted a smooch on the dot atop the middle letter of “Rio” near the five rings.
And to complete his rejoicing, del Potro jumped into the front row for a group hug with some of the thousands of flag-waving, name-chanting fans who rooted so vociferously for their man.
With their blue-and-white flags and national soccer team jerseys, the Argentines in the crowd supported him with choruses of “Ole, ole, ole, ole! del Po! del Po!” — often drawing boos or shushes from Nadal’s backers. The Spaniards chimed in, too, shouting “Na-dal! Na-dal!”
All the cacophany created occasional delays between points, prompting chair umpire James Keothavong to ask for quiet.
Nadal, a 14-time Grand Slam champion, earned the singles gold medal for Spain eight years ago at the Beijing Games, but sat out in 2012 because of a knee injury. He added a doubles gold on Friday, teaming with his good pal Marc Lopez. But instead of another medal of that color, he will try to go home with a bronze by beating Nishikori on Sunday — not bad, considering Nadal missed 2½ months with an injured left wrist.
Nadal got broken to trail 5-4 in the third set, allowing del Potro to serve for the match. Nadal broke right back at love, with the help of a couple of superb shots he marked with more than a half-dozen fist pumps apiece. In the next game, del Potro held three break points at love-40, but Nadal held for a 6-5 lead.
In the tiebreaker, del Potro went up 5-2 with — what else? — a forehand winner, then earned a pair of match points with a 127 mph ace. He converted the second on a miss by Nadal, who made only six unforced errors in the first set and 25 over the last two.
“I gave it all I had,” Nadal said, “and the only thing left to do is to congratulate del Potro for his victory.”
The most memorable moment of Murray’s straightfoward win over Nishikori came right at the end.
Serving for the victory, Murray came up with a tremendous down-the-line backhand passing winner on a 23-stroke exchange, stumbling as he hit the shot and winding up sitting right there on the green court. When he realized he’d won the point, he raised a fist, then stood and motioned to the crowd for more noise.
That gave Murray his third match point, which he converted with a service winner. He yanked off his white hat and bellowed.
“Bit of a lucky shot,” Murray said. “I didn’t even see it land, so I didn’t know whether it was in or not. Thankfully, it was good.”