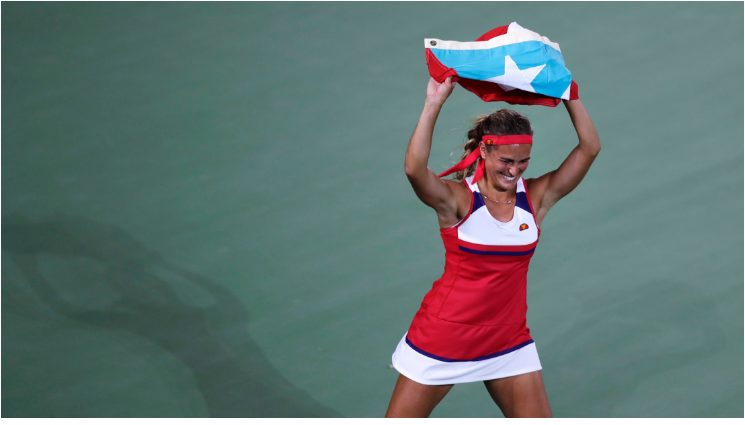 No one did see her coming from the Start the Unseeded 22-year-old  Puerto rican Tennis Player was on the Odds of winning a Medal not to talk of been in the Final of Rio 2016 and Beating the Best of the best to Clinch Gold for herself and the first ever for her country.

Not even The World No 2 Tennis Player could Rain on her Parade as she shocked Anqelique Kerber in 3 sets to take home Gold, it was her day, her season and a Moment to remember for life.

Puig is also the first woman representing Puerto Rico to earn a medal of any color at an Olympics, and when she finished a tense closing game — saving six break points and converting her fourth match point — she dropped her racket and went over to collect a flag she paraded across the court. 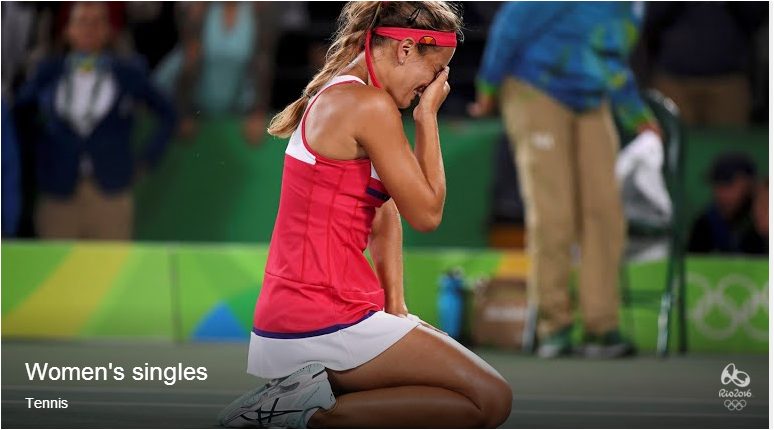 Gigi Fernandez, who is Puerto Rican, won two Olympic women’s doubles gold medals in tennis, but did so while representing the United States.

The 22-year-old Puig was born in Puerto Rico. She now lives in Florida.

As a teenager at the 2013 French Open, Puig became the first woman representing Puerto Rico to reach the third round at a Grand Slam tournament in the Open era, which began in 1968. A month later, she followed that up by getting to the fourth round at Wimbledon, portending great things, but she hasn’t been that far again at any major.

Also notable about Puig: She is the first unseeded woman to win the singles title since tennis returned to the Olympics in 1988. Ranked 34th, she added her surprising win over the second-seeded Kerber — the Australian Open champion and Wimbledon runner-up this year — to those she picked up in Brazil against two other past major title winners, Garbine Muguruza and Petra Kvitova.

Earlier Saturday, Kvitova earned the bronze for the Czech Republic by beating Madison Keys of the United States 7-5, 2-6, 6-2.

Kvitova called her medal “one of the best things that happened in my career, definitely.”

And she played attacking tennis full of powerful shots that seemed to rattle the counter-punching Kerber.

Puig smacked a down-the-line backhand — her 18th winner to that point, 10 more than Kerber — for a break that gave her the opening set.

During the ensuing changeover, Kerber was visited by a trainer, standing on the sideline while her lower back was massaged and manipulated.

Kerber then left the court for a medical timeout, leading to a total delay of about 8 minutes. During the break, Puig walked out on court and practiced serves.

Didn’t do her much good, though.

When action resumed, Puig made a series of errors that allowed Kerber to break for a 1-0 lead in the second set, which quickly became 2-0.

But Puig got back into that set by breaking to 4-all when a 23-stroke exchange ended with Kerber dumping a forehand volley into the net.

That set off singing, dancing and flag-waving among the Puerto Rican contingent in the crowd. Their chant of choice was “Si se puede!” (“Yes we can!”).

But they were quiet a few minutes later, when Puig double-faulted to set up break point for Kerber, who cashed in the chance with a cross-court backhand winner for a 5-4 edge, then served out the set to force a third.

Yet Puig, despite so much less experience on these sorts of big stages, raced to a 5-0 lead in the final set and was on her way.
READ ALSO
Ex-beauty queen, Ronke Tiamiyu, rethinks her Detty December plans after spending over N1.3M in four days (video)

Johnson Olumide - February 18, 2020 0
Two Nights ago Triple MG Artist Iyanya Held its first ever Concert at the Dunes Center In Abuja. The Kukere Master was supported on stage by several...

Johnson Olumide - February 17, 2020 0
The Dr Dre Rapper Biopic Movie Straight Outta of Compton has been in Top gear now,two weeks after its release in theaters across the United States.    The Movie has been Back lashed for...

Johnson Olumide - April 14, 2018 0
Beautiful Ghanaian actress, Juliet Ibrahim who is the the girlfriend of Nigerian rapper, Icebergslim, talked about her favorite sex position in a social media...

Johnson Olumide - February 17, 2020 0
The 28-year-old Canadian Rapper is set to drop his 4th Studio album come April 29th which is this Friday. Drake took to his social Media...

#BBNAIJA: No one deserves success better than YOU – Ike Says As He Wish...

Violette - November 10, 2019 0
It's a new day as well as a new month and celebrities have taken their time to usher their fans and lovers into the...