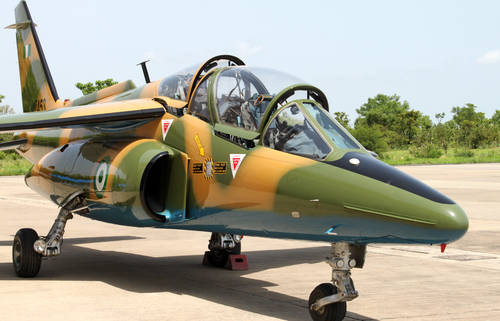 It has come to Notice of the Nigerian Military Operation that Panic has widely Spread out in the Pipe Line Are of Lagos-Ibadan Express way called Arepo Town in Ibafo due to Activities carried out by the NAF recently to destroy the Hideouts of Oil Bunker and alleged Niger Delta Militant whom has been terrorizing the Area for too long.

In an official Statement Released it reads:

The attention of the Nigerian Air Force (NAF) has been drawn to media report on apprehension and panic by members of the public living around the area of ongoing air operations at AREPO and its environs. Thus, it has become necessary to allay the fear of the people with a view to sustaining public confidence and support for the ongoing operations against pipeline-vandals code named OPERATION AWATSE in the South West region of the Country. Therefore, the NAF wishes to assure the general public, within the affected areas, of their safety as the ongoing air operation is carefully planned to avoid collateral damage to the civil populace and property.

The NAF is careful to ensure that only legitimate targets, such as observation post, anti-aircraft gun position, boats laden with suspected stolen petroleum products and armed combatants, are selected for strike. In aligning with this global best practice, the NAF usually undertakes surveillance flights before and after each strike to mitigate incidental harm to civilians and property. While pre-strike assessment missions are undertaken to help identify and select legitimate military targets for neutralisation, post-strike or Battle Damage Assessment missions are meant to ascertain whether the desired degree of impact was achieved or not, and if a follow-up re-attack is required.

It may also be necessary to state that NAF pilots are adequately trained, and as professionals, would not engage in human right violations and abuses. The successes recorded in the past 5 days since the NAF commenced strike mission in AREPO, in support of surface forces under OPERATION AWATSE, attest to this display of absolute professionalism by NAF pilots involved in the operation as no single incident of collateral damage has been recorded.

Meanwhile, it is necessary to add that the NAF, working in collaboration with men of the Nigerian Navy Special Boat Services (SBS), has set on fire the hideouts and camps used by the pipeline vandals in AREPO. As a result, Community leaders and members of the public with useful information on the whereabouts of the fleeing vandals and other criminal elements are please requested to oblige such information to the Security Agencies. Furthermore, the civil populace is please advised not to panic but to go about their legitimate businesses.