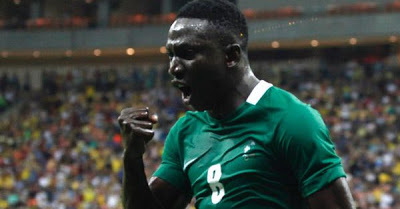 The Nigerian Olympic Men Football Team where made to work hard till the Last Minute before they could Secure their Win from their first match at the Olympics.

The Nigerian u-23 arrived Brazil just Six hours before their kickoff game against Japan on Group Encounter.


But things got underway Quickly for the boys as the made short work for thier First Goal, Ezekiel was fed a Through ball on the right flank close to the Box 18 of the opponents post, he dribbles past 2 defenders then Unleashes a Low Drive Shot in which the Goal Keeper Parried into the Part of  Sodiq who did the simplest thing to tap home from close range in 7 minutes of play.


Thing started to torn sour as the Nigerian defense committed a foul inside box 18 and conceded a penalty, it was coolly converted.


The First have ended in a goal blessed half as Nigerian Lead 3-2, on the resumption of play Nigeria got their own Penalty and Etebo who has been firing from all cylinders scored the spot kick for his Ha trick of the Night, it didn’t take long again before he made it 4 after the on rushing goal keeper of the Japan left his post on guarded for the Nigerian Midfielder to Struck home is 4th of the Night from 20-yards out.

It seemed all was not done had japan pulled back with two goals late on as the Nigerian poor defense allowed them back into the game.


extra time was exhausted and the referee blew the final whistle as Nigerian goes home winners of the night.


History was also made has Etebo became the First Nigerian to score a Hatrick at the Olympics.

Johnson Olumide - February 18, 2020 0
If you are a celebrity, your first and foremost enemy no one is the Media-sphere were all kinds of talking down is been said without you been...

Violette - August 4, 2020 0
It's currently a celebratory mood at the Big Brother Naija 'Lockdown' show as Ozo who is currently the head of house celebrates his birthday. Though...

Johnson Olumide - March 21, 2020 0
Ex-BBNaija housemate, Uriel Ngozi Oputa declares she is a celibate and she hasn't had sex for 3 years.   Uriel said she broke her virginity very...