Home Entertainment Celebrities Pep Guardiola Tells Joe Hart to Improve on his Footwork to get... 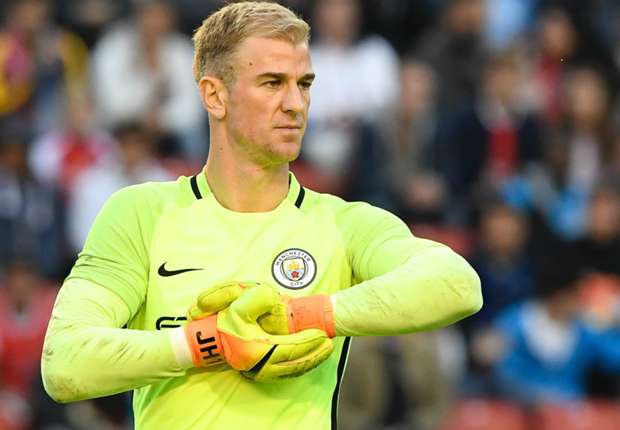 The English Goal keeper had been known for Excellent saves on the Pitch and like wise manner outrageous Goal Keeping Errors.

Such Errors has been noticed by the New Man City Manager Pep Guardiola and Has had a Conversation with the Skipper about it.

He has Also Informed Hart that he will not be the one choice goal Keeper this season, as Willy Caballero would be in the Starting Line Ups.

Guardiola is looking for a goalkeeper that is just as talented with his feet, and believes Hart needs to improve his level of skill playing out from the back.

City have been linked with a move for Barcelona goalkeeper Marc-Andre ter Stegen, with 29-year-old Hart’s future the subject of plenty of speculation in the off-season.

Reports suggest Hart will not be number one for their Premier League opener – on Saturday at home to Sunderland – and Guardiola said the England international must adapt or face losing his spot in the squad all together.

“We have Xabi Mancisidor [goalkeeping coach] for that. So we have had a chat.

“He’s comfortable. He has quality and he can do that… with time. I’m not saying he’s unable to do it.

“Maybe there are other goalkeepers with more quality at that. But Joe, with training, he can do it – with time.

“But his time is now. It’s not about what happens in six months, seven months.”

“I know the expectations are high,” he said. “I know if we don’t win it will be a big disappointment for the fans.

“I have to handle that and I would have stayed in Barcelona if I didn’t think I could.”
READ ALSO
Bobrisky celebrates his dad birthday with Versace cake (photo)