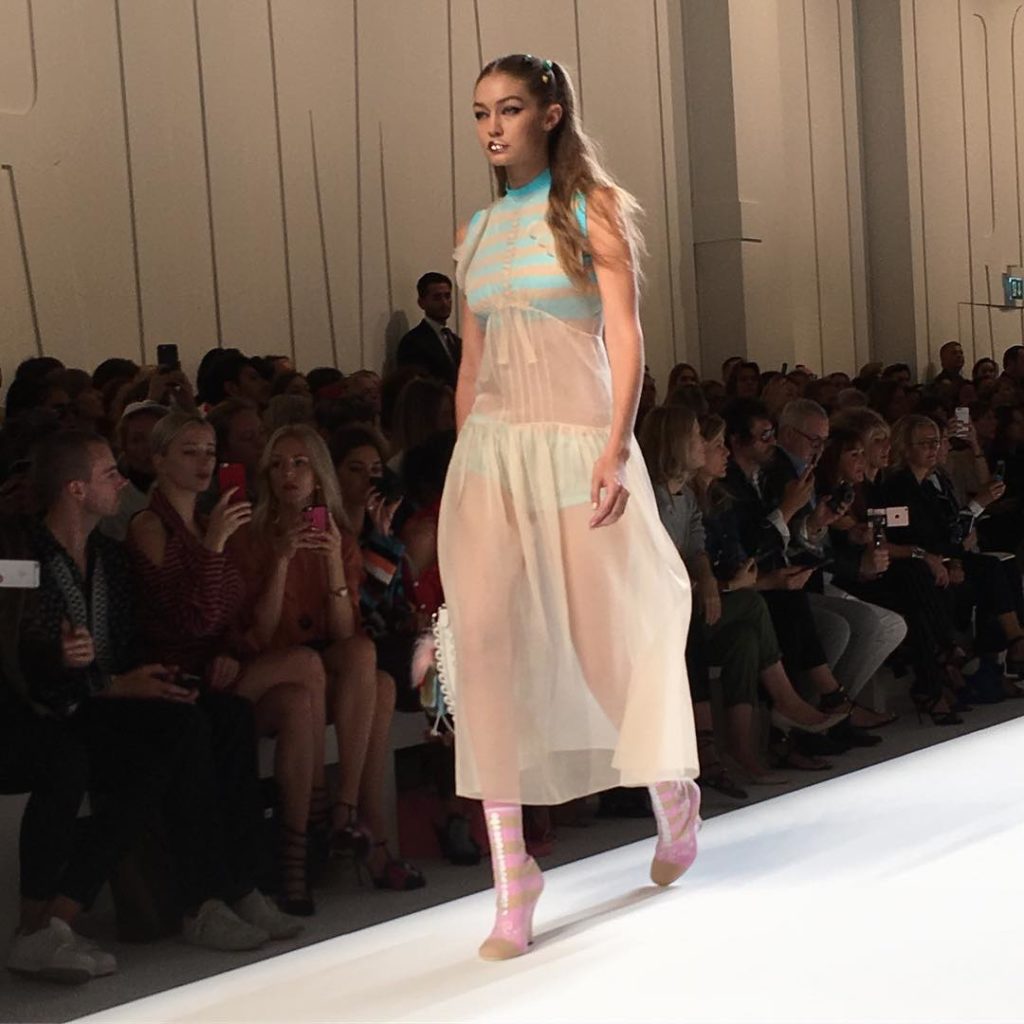 The Tennis Pro and Fashion Designer Celebrity has been touring Europe in the last 5 days now and since Wednesday been in Milan for the MFW.

She was seen two days ago at the Giorgio Armani Fashion Event in one of her Raciest Outfit Ever Wearing an Unzipped Giorgio Armani Bomber Jacket that put her Sexy Boobs on Display,coupled with a Head turning Red Lipstick.

Serena had a tough Season coupled with both shoulder and leg Injuries which only made her win just one Grand Slam this year compared to last year where she won 3 Straight Grand Slam.

READ ALSO: Serena Williams raunchy as she shows off her boobs in a See through Green Fishnet Crop top

In  an interview with CNN at the official Launch of her Coach Patrick’s Tennis Academy, She said is she tired of playing Tennis Games with Injury and losing Matches she isn’t suppose to loss.

The soon to be 35-year old is enjoying another day in Milan as She shares Photo of Supermodel  Gigi Hadid on the Milan Fashion Show Runway,captioning the Photo  serenawilliamsI spy my Gigi. ❤️ First time I’ve been able to see you work! Finally!! @gigihadid
READ ALSO
Empire Star Actress Taraji P. Henson Reportedly Pregnant At 47

”It is illegal to Leave The Party That Sponsored Your Elections” Femi Falana to...

Violette - July 2, 2019 0
Lawyer and humanright activist, Femi Falana, says the defection of some lawmakers from the All Progressives Congress (APC) to the Peoples Democratic Party (PDP) is illegal...

Johnson Olumide - March 21, 2020 0
BBN’s reality star, Uriel Oputa has replied a troll who compared her success after leaving the BBNaija house in 2017 to that of Alex...

How have the top six fared 11 games in?

Eddie Andy - November 7, 2017 0
It is time for another international break and a chance to sit back and ponder who is flying high in the Premier League and who is...

Eddie Andy - March 8, 2018 0
The Nigeria Deposit Insurance Corporation, NDIC, has warned Nigerians to avoid trading in bitcoins and crypto-currencies. It said that there was 100 percent risk involved,...