Home Entertainment The Game Disses Meek Mill by sharing a Photo-shoot Photo of him... 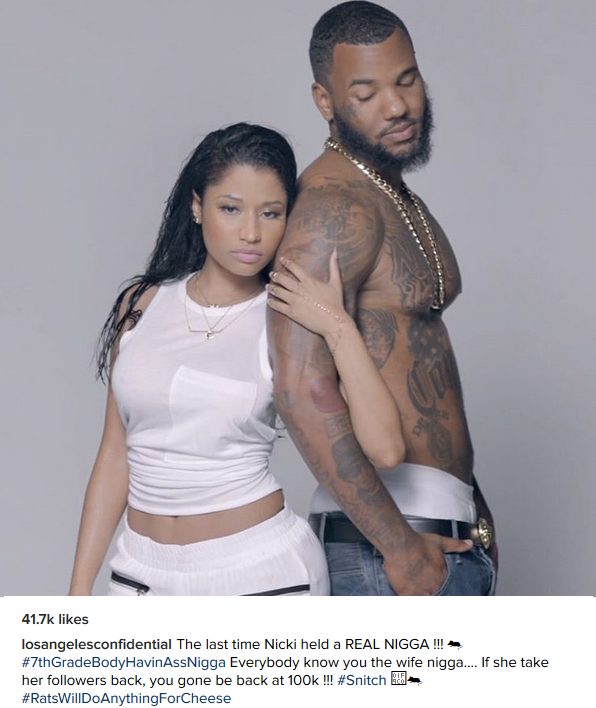 The Photo was taken during the Pink Print Album Production, and US rapper who took a shot at Meek Mill from his New Song had responded to Meek Mill Diss where Meek raised the Middle Finger while talking to his Girl Friend Nicki Minaj.

The Game also claimed in the captioning of the Photo that was the Last time Nicki Held a Real NIGGA!!!

Johnson Olumide - October 1, 2018 0
A obviously aggrieved lady has taken to social media to call out her designer for allegedly giving out her wedding anniversary dress to another...

Johnson Olumide - January 2, 2018 0
Selena Gomez looked sensational as she rounded off the year with a sun-soaked getaway to Cabo, Mexico with her pals . The 25-year-old star rocked...

‘The loss Linda Nkechi on National Youth Service in Abuja is one death too...

Violette - July 2, 2019 0
Former Education Minister, Oby Ezekwesili has reacted to the killing of Linda Angela Igwetu, a member of the National Youth Service Corps, NYSC, by...

University Student Drinks Hypo Bleach TO Kill Herself After Spending Her School Fees At...

Violette - July 20, 2018 0
A Bowen University student identified as Tolu Mafo, has reportedly tried to take her own life by drinking a fabric bleaching product she was...