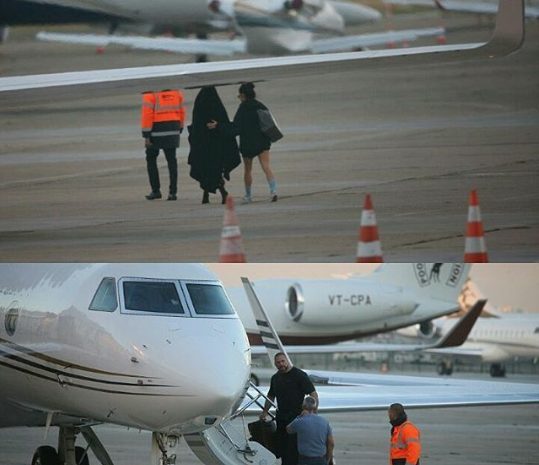 The 35-year-old Reality TV Star experienced her Worst Ordeal in Paris over the weekend as she attended the Paris Fashion week.

Kim was left reeling after her encounter  at gun point with robber at the late Night hour.

She was Seen immediately Leaving Paris on the morning after boarding a private jet covered in a huge black Scarf hiding her face from Cameras, while her personal Assistant held a protective hand on her back, Daily Mirror Reports.

Kim was surrounded by security at the airport, and is said to be “shaken” following the incident.

Her bodyguard Pascal Duvier joined her on the jet, as well as her personal assistant, who remained close by throughout.

A terrified Kim Kardashian was ‘tied up, bundled into the bathroom and had a gun held to her head’ in a harrowing armed robbery last night.

The reality star,  was threatened by FIVE armed masked men dressed as police officers while her husband was performing in New York.

Reports are claiming that robbers managed to access Kim’s room after forcibly handcuffing the building’s night guard and making him direct them to the star’s room.

They then proceeded to ‘tie up’ the reality star at gunpoint and lock her in the bathroom with her bodyguard before escaping on bicycles.