His Death was announced on national Television by his Brother , President Raul Castro.

“The commander in chief of the Cuban revolution died at 22:29 hours this evening,” 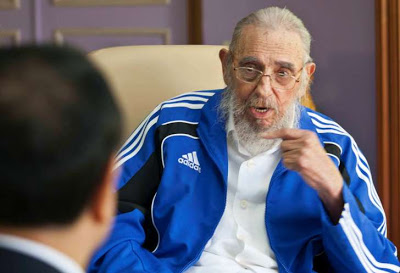 He provided no further details. Fidel Castro ruled Cuba as a one-party state for almost half a century before handing over the powers to his brother Raul in 2008.

So many assassination attempts where made on his life during his time, but luckily survived all.

May his Gentle Soul Rest in Perfect Peace.

I want to be slapped during sex – Twitter user reveals

Johnson Olumide - March 21, 2020 0
A Twitter user is making news now after she revealed her sexual fantasy on the social media platform. According to the lady, she wants to...

Johnson Olumide - February 17, 2020 0
The Glamour Women of the Year Awards 2015 Edition took place over the Weekend In New York City and so many Celebrities and Socialite including people form...

Johnson Olumide - February 17, 2020 0
Controversial socialite Dabota Lawson who married a man far older than her age, enough to be her father just because of his money and...

Food and Sex is not enough to keep a MAN in a marriage –...

Violette - March 1, 2021 0
Popular Nigerian comedian and actor Woli Arole is back on social media with his advice on marriage and this time he has insisted that...