Home News Few Facts you need to know about the November U.S Election

How does the US presidential election system work?

The most notable thing about the US presidential election for most anyone not living in America is just how long the campaign runs.

We end up calling it “election season” because it goes on for so long.  The first person to announce their candidacy this cycle was Ted Cruz on March 23, 2015. 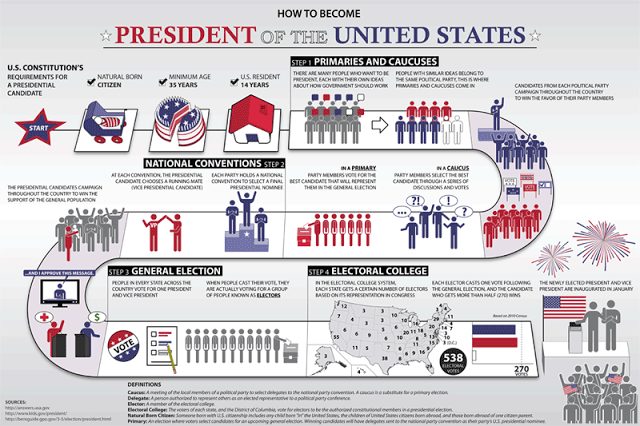 Election day is November 8, 2016. Yes, they campaign for president for long past a year before America votes.

The system is broken down into basic two parts – the Primary and the General Election. The Primary comes first and that is when each of the political parties holds contests in each of the 50 states to select the party’s nominee for president.

The final primary this cycle was held near the beginning of June. Then the General Election kicks into full swing It’s very specifically spelled out in the US Constitution that the Presidential election be held on the “Tuesday following the first Monday in November.”  The President is not elected by a simple nationwide popular vote. Of course it must be slightly more complicated; we are talking about the United States.

The president is elected by winning the “electoral college.” Essentially each of the US states is allotted a certain number of “electoral votes”. 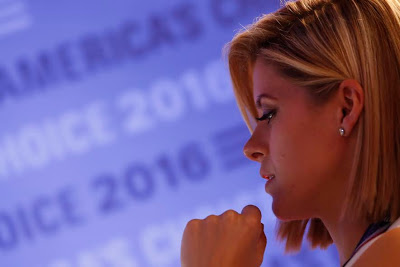 For a candidate to win they must win the majority of the country’s electoral votes, which happens to be 270 votes.  That’s why you will hear us constantly talking about “the road to 270.”  Confused yet?

Which are the swing states?

Swing states are the states that are neither reliably red (Republican) nor blue (Democrat).  The state literally “swings” between the two parties depending on the cycle.  Which states are considered “swing state,” or “battleground states” as many of us call them, changes over time as populations and voting patterns change.

An example: Barack Obama won North Carolina in 2008 but then lost the state to Mitt Romney in 2012.  That means North Carolina is a battleground because both campaigns in 2016 see a chance to win there.

Why is Ohio considered the most important state in a US election?

Ohio is considered the perennial bellwether state.  The old tagline is: “As Ohio goes, so goes the Nation.”

That is because no Republican candidate has ever won the White House without winning Ohio. For that matter, the last Democrat to win without carrying Ohio was John F. Kennedy in 1960.  All of this together has earned this hearty Midwestern state the reputation as one of the most important states to watch on Election Day.

This also means Ohio is a state where candidates spend a lot of time, energy and advertising money throughout their campaign.

What have been the key issues in the presidential election race?

Anyone being honest will likely tell you this has been an “issues light” election.  This race has been much more about the character and personalities of these 2 particular candidates than about where they stand on any of the major issues.  Beyond that, the big issues that do matter to voters this year are: immigration policy, filling the vacant seat currently on the Supreme Court (the highest court in the land), trade policy and foreign policy (particularly America’s role in fighting ISIS and involvement in conflicts abroad in general). Also a big point of discussion: Obamacare, the healthcare reforms passed in 2010.

Was there a turning point in the presidential election race?

The high-octane rhythm of this election season has simply never let up and is like nothing any of us political observers have seen in recent history. There have been so many twists and turns in this election; it’s nearly impossible to single out just one turning point.

When will we get a result?

The earliest polls close is at 7:00pm eastern on election night. That will be the earliest we’ll be able to make any definitive call on which candidate wins in those early states. The very last polls close at 1:00am on November 9th in Alaska but a winner will likely be called before that.

For a point of reference, CNN called President Obama the winner in 2012 at about 11:15pm eastern.  In 2008, CNN declared Obama the winner at 11:00pm eastern.  The biggest unknown right now – how late of a night will it be? It all comes down to how close the count is and no one can predict that right now.

When does the new President take up office?

This is also explicitly laid out in the US constitution. The 20th Amendment says that the term of the President and Vice President ends at noon on January 20th.  That day is called Inauguration Day — when you’ll see the president-elect place his/her hand upon the bible and take the Oath of Office.

From that point on January 20,, 2017, the government is officially in the hands of the new president. Their staffs move in and immediately their phones start ringing.

Are there also elections for Congress (the House of Representatives and the Senate)?

Republicans currently hold the majority. Democrats need to win 4 or 5 seats (depending on which party wins the White House) to take control of the Senate.  This is possible but just like the presidency, no one will know for sure until all the votes are counted on November 8th.

Why is this important?

The next President won’t get much done without the support of Congress. That’s why you’ve been seeing Hillary Clinton campaigning in states with close Senate races—if she wins, she needs Democrats to win 4 more seats to gain control of the Senate. And she’ll still be dealing with a Republican-controlled House, since the majority there is much larger.

But Tuesday night isn’t just about the Presidency and Congress. It’s also about the Supreme Court. Not only is there a vacant seat, but there is a possibility that there could be two more seats to fill during the next President’s term. And—you guessed it—anyone the President nominates must also be confirmed by the Senate.

At what point in proceedings do we get an indication who is likely to have won?

On the big day, polling stations will begin to open on the U.S. East Coast as early as 11a GBT.  Opinion polls are conducted throughout the day from voters across the country, and these “exit polls” are used by CNN to project the winner in each state.

If the exit polls are too close to call or somehow inconclusive, news agencies will wait for the actual results to be released. Polls close in the evening, and since the 50 states stretch across six time zones, be prepared for a late night!

That, of course, assumes we have a clear winner by the end of the night. In 2000, the tight vote in Florida triggered an automatic recount and legal showdown. It was 36 days before George W. Bush was certified as the winner.

How many people in the US are likely to cast a vote?

Since the polls right now show there are very few undecided voters left out there, both Trump and Clinton are doing everything they can in these final days to get their supporters inspired, energized and ready to head to the ballot box.

What is the demographic split between black/white/Hispanic or young/old etc?

Research shows that the 2016 U.S. electorate could be the most racially and ethnically diverse ever.  According to Pew, over 30% of voters on Election Day will be African-American, Hispanic, Asian or another racial or ethnic minority.

Also a big first: there are as many Millennials eligible to vote as baby boomers. The big question—will they actually show up to vote?

Where is the result announced?

On CNN of course!

When does the Obama family have to move out of the White House?

It all happens on Inauguration Day. Usually, the sitting president and their spouse host the incoming-First Couple for tea , and when they depart for the ceremony, the White House staff leaps into action. The former First Family’s belongings are moved out and the incoming First Family’s things are moved in. The entire operation takes about six hours and a whole lot of moving trucks.

If Hillary wins, does this mean Bill Clinton moves back into his old bedroom?

Although each First Family brings their own preferences to the style and décor of the White House residence, the floor plan has remained the same for decades. So, if Hillary Clinton is elected, she and the former President will be moving back into the rooms they lived in during their first stay in the 1990’s.