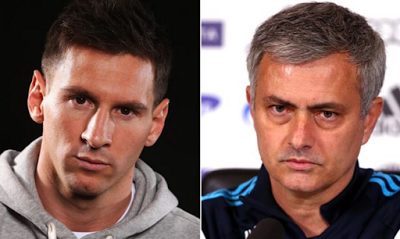 The 29-year-old Barcelona Forward has refused a new contract Renew with Barcelona as due to insufficient Increase on his wages. Cristiano Ronaldo is Rivalry had just some weeks ago signed a Contract worth $500,000k  Weekly Salary.

Mourinho, who has already spent about £150m since arriving at Man U, doesn’t feel Messi will leave Barcelona.

With Lionel Messi every season is the same story, saying he’s going to go and then he never goes,” Mourinho said during Manchester United’s pre- Europa league press briefing.

Honestly, I hope he never leaves because he belongs to Barcelona and Barcelona belongs to him.”The most natural and beautiful thing would be to stay there, to start and finish his career at Barcelona.”I think he will end up staying, but that is merely my personal opinion.”

The Current World Footballer of The Year has been with Barcelona since he was 12-year-old and has had the best of his career moments with the Catalan Club.

Violette - November 5, 2020 0
Big Brother Naija 'Lockdown' winner, Laycon have continued his good rise to fame as his EP 'Who is Laycon' hits a staggering 10 million...

Johnson Olumide - February 18, 2020 0
The No One Singer took to her Instagram page to express her heart felt wishes to the passing away of the boxing legend Muhammad...

Serena Williams Return to Winning Ways as she beats Madison Keys at 2016 Italian...

Johnson Olumide - February 18, 2020 0
The 21 time grand slam got back to winning ways earlier today as she won her first title since the US Open Last year...

I’m not a big fan of awards — Wizkid tells Naomi Campbell in new...

Violette - December 16, 2020 0
Multiple award-winning afropop singer and songwriter Wizkid have noted that he is not a big fan of awards, a statement that might raise eyebrows...