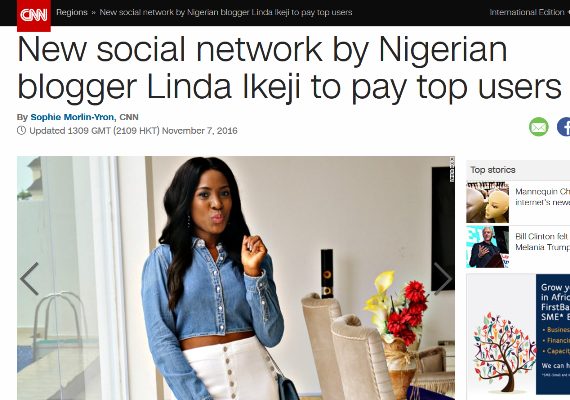 She is the Face of Africa Blogging Platform,as she is also currently the Most successful in the Business and when you are that success you draw attention.

Just days after launching LIS which is Linda Ikeji Social, she gets a Feature on the Biggest News Website in the World.

Love her or not, she’s one of Africa’s most famous news and gossip writers. Now she’s hoping to take on Facebook with her very own social network, which she says hit 50,000 sign-ups on the first day.

Linda Ikeji, a former model from Lagos, Nigeria, says her social network, LIS (Linda Ikeji Social) has something others lack: a one-stop shop for everything online.
“About 30-40 million Nigerians are now online, and they go through so many sites,” Ikeji told CNN.
“They go to Facebook for connecting with friends. They come to my blog to read the news. They buy and sell things and go to places like Nairaland where they exchange opinions.”
Just six days in, the network has 86,000 followers. Within the next five years, Ikeji said she hopes to be the new Facebook.
“Facebook is my competition,” said the businesswoman, who is famous for her tabloid reporting, which many have criticized for promoting gossip and lacking in credibility.
In 2014 her blog came under scrutiny amidst allegations of plagiarism and unfair usage of images which led to the blogging platform Blogger, run by Google, temporarily taking her website offline.
Paying the popular
Apart from her controversial ways, she differs from Facebook in another major way, however. Her plan is to pay people who gain a lot of followers on the site.
“Once they have 50,000 followers on their page, we will automatically start monetizing it. That means we will put our client’s banners on the page and pay you a commission from what they pay us.”
The cash incentives are paid out to the so-called ‘wallet’ — a section on the network where people add their bank account details.
It remains to be seen if anyone will hit that high. For now, she will pay out a weekly share of her advertising revenue to the most popular accounts, she says.
“Next week we are putting N20,000 ($63) each into 50 people’s wallets,” Ikeji said.
The network also plans to pay users N8,000 (around $25) for original news content.
The aim of the business is to give back to the online community.
The strategy could mean good money for users, and the social network who gets help with attracting people to sign-up. A win win, she explains.
“Being on social networking sites make the (site) owners billionaires. You being on our site will make us money, but at the same time we will share some of that money with you.”
A million dollar business
Ikeji is everywhere in the online sphere, with 1.32 million Twitter followers and 796,000 following her Instagram account.
It all started 10 years ago, when she was modeling, and came across a blog post about herself. “I liked it and I wanted to start my own blog.”
Back then, blogs were more personal accounts of people’s lives, she said. “I wanted something more interesting. I wanted to do gossip and news, and I gave them something different.”
Already a celebrity, it quickly drew a lot of readers.
“It was like a celebrity blog: people knew who I was and were very interested in what I had to say.”
It seems to have worked. Today her blog has around 7 million page views per day and is especially popular with Nigerians living abroad in countries such as China, Dubai and the U.S., according to Ikeji.
“It’s the number one blog in Nigeria,” she says.
However popular and successful she claims to be, Ikeji continues to be controversial.
She says the criticism is mainly down to two things: Jealousy and the usual online critique famous people often endure.
“There are people who are jealous, because they don’t understand how somebody can be so successful at something so many others are trying to do.”
Others simply don’t like what she does, but Ikeji seems unfazed.
“They may not agree with the way I do stuff. They will criticize and show their opinion, which is fine with me.”
READ ALSO
Beat FM OAP Toolz Oniru Demurin and Husband enjoy Vacation at the Maldives

Violette - November 30, 2020 0
A new dramatic scene is about to unfold in the entertainment industry as afrobeat singer and songwriter Tiwa Savage attacks a journalist who labeled...

Munakur Jantiku - July 20, 2020 0
We are all in for all the spice these season's Big Brother Naija has to bring And Ebuka who is the host for the...

Violette - July 20, 2020 0
Housemate at the fifth edition of the big brother naija show, Laycon is already gaining ground outside the show as top celebrities back him. Big...

#BBNaija: More trouble for Cross as Jaypaul and Saskay seal their ship with a...

Violette - September 2, 2021 0
Chances of Cross forming a good relationship with Saskay at the ongoing Big Brother Naija season six reality show has been dealt with a...

Banky W and Wife, Adesua revealed How they lost their twin babies (Video)

Johnson Olumide - April 5, 2021 0
One of Nigeria's favourite celebrity couple, Adesua and singer Banky W via a video posted by Banky W on his Instagram revealed they lost...