Home News Rihanna Sexy as she Rocks her Massive Dreadlocks while Filming ‘Ocean’s... 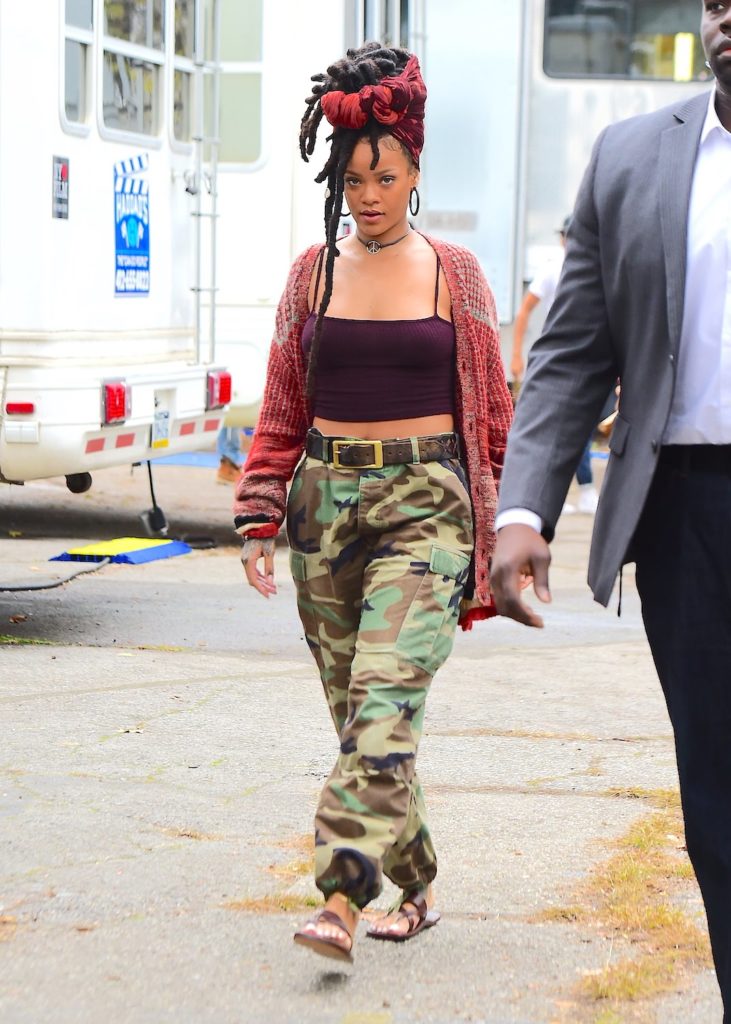 The Sexy With Me Singer is currently Busy in Front of the Camera as she makes her Comeback in Hollywood Starring in the Latest Ocean Eight Movie which is been shot in New York City.

Rihanna was Spotted in her Dreadlocks Hair all well Wrapped with a Beautiful Orange Head wrap.

She has been rocking the Rastafarian Hair Style since Marking a Remembrance of the Late Bob Marley.

The “Diamonds” singer accessorized her bold ‘do with a burgundy crop top, baggy sweater, and camouflage cargo pants.

While Rihanna’s character — and the plot of Ocean’s Eight — are still being kept under wraps, the film will be a spinoff of the Ocean’s Eleven films starring George Clooney, Brad Pitt and Matt Damon.

“Honestly, right now I am looking forward to the hair and makeup trailer,” she said. “Oh my god, I have so many questions… I just feel like I am getting to peer behind the best curtain ever to see what everybody does.”

“My career has been a series of working with people that are better than me and trying to pick up things that they do, pull them into my life and hopefully get better myself,” Hathaway added. “So I cannot believe I get to do that with the women on this.”
READ ALSO
Ini Edo Gets New Endorsement Deal

Johnson Olumide - March 21, 2020 0
Veteran Nollywood actress, Kate Henshaw has read the riot act to “unruly” characters, who hide behind their keypads to spew disrespect. According to the ageless entertainer, she...

Media Personality, Biyi, reveals his new ordeal in the hands of his bae, Sabena...

Violette - July 27, 2021 0
Popular media personality, Biyi has taken to social media to reveal his new ordeal in the hand of his girlfriend, Sabena, just months after...

Violette - August 11, 2020 0
Popular media personality, Toolz Oniru have finally share the picture of her second whom she welcomed some days ago. Toolz Oniru is no doubt one...

Johnson Olumide - February 17, 2020 0
Christina Milan was looking sexier than ever as she comes back with new EP Like Me on Fri. Posing provokingly within LA's tallest building, the United States of...