Her book On Becoming was launched Yesterday November 27th 2016 and before the Launch bellanaija got their hands on a copy of the books.

Her story of marital Turbulence is not new to us, but some angles to it that we didnt know about, First Toke is an orphan, whose Parent Died in a House Fire when she was just 8-year-old. 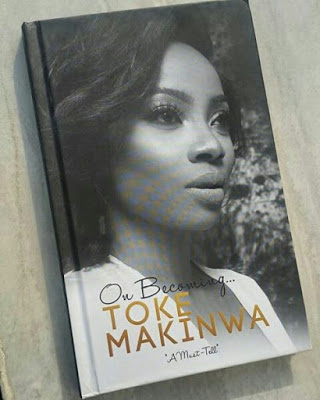 So as an immature teenager, through her twenties, she fell in love with a man who would nearly ruin her life – with a sex tape, side girlfriends. A man that almost drove her to commit suicide by drinking Dettol after he cheated, got babymama pregnant, their wedding crashed and the story blew into a huge international scandal.

Bellanaija got a copy of Toke Makinwa soon to be released book – On Becoming in which she shared her incredible survival story and it has been an interesting and eye-opening read so far!

Toke says it “is not a tell-all but a must tell. Here are some MUST-READ excerpts.

The Discovery
I got on my knees in front of him, my voice calm as I can make it. “Maje, you can’t keep lying. What is going on?
He walks away, leaving me there with my heart in my hands. I see him pacing, like he is
having a private conversation. Then all of a sudden, he walks back to the living room, looks straight into my eyes and says, ‘She’s pregnant’.
I fall to the ground. My head….
‘What’s she having?’
‘A boy,’ he says.
‘How long have you known?’
‘I’ve always known…. It was what I thought I wanted,’ he says.

The Wedding
“Finally, I thought. He chose me! He has stepped up and he’s finally ready to make us a priority.
It was my wedding day.
I was happy, yet I was waiting for something to happen. Maje had disappointed me three times before. We would pick a date to go to the wedding registry and he would call it off…. We had discussed eloping, but he’d never committed to any plan.

It wasn’t until we shared our first dance to John Legend’s ‘All of Me’ that I finally believed that it had happened.

Maje invited me to Abuja…. As I was putting away my things I saw all kinds of feminine items – earrings on the dresser, sanitary pads in the drawer….”

The Other Woman
“Who was that girl?” I asked
“That’s that girl”
“Which girl?”

“The girl I told you about. Her friends are always calling me to say she really likes me and has a crush on me. Her name is Anita.”
“So that’s the Anita girl they say you are dating.”

“I’m not dating her. How can I date someone that is always saying ‘can I come and see you? I’ll bring my friend that you think is cute’?”

I accepted Maje’s explanation and concluded that Anita was not important. So I’ll be with Maje and she’d call and I’d tell him, “The girl that has a crush on you is calling.” And it would be nothing.

The Sex Tape and Bleaching
“At some point while we were dating, Maje had asked if he could tape us having sex. This was a new one for me but I would do anything to keep my man, or so I thought, and so I obliged.

But I was nervous afterwards because I didn’t want the tape to get into the wrong hands….

I dragged the file back to his desktop, and I could tell from the stilled image in the video that the person in it was not me…. I clicked play and watched horrified as Maje had sex with Anita.

Watching that video, all of the inadequacies I thought I had dealt with over the years came rushing back.

I had been with Maje from when I was an immature teenager, through my twenties, and for most of those years, Anita had been the standard I had to live up to. I had lightened my skin at some point – Anita was half Lebanese and half Ibibio, and Maje made me feel like he preferred her lighter skin.”

Breakups and Makeups
Months passed and I still couldn’t find a job (in London). And I was still heartbroken. Maje and Anita were officially an item, and I stalked them on Facebook. Maje would put her picture up and they would write on each other’s walls.

…one cold night as I got off the bus, I got a Facebook message from Maje. It read: ‘I miss you and I cannot deny or hide it, come back to me’.
We started talking again… I convinced myself that he had changed.

Maje and I had been together for nine years, on and off, at this point, and it had been an unending cycle of hurt and betrayal. Every time we took ten steps forward in our relationship, we took fifty back. Each time I gave up and let go, Maje would come after me and hold on so tightly till I gave in.

Another child
… there was a 70-day fasting and prayer programme at my church. I joined in: I was praying for Maje and I. On the final day, I prayed and asked God to reveal why Maje and I couldn’t find peace with each other.
…I opened my email address and typed Maje’s email address in. I had no idea what his password was but I was determined to get into his account…. I went through email after email until I found pictures of a boy that looked exactly like Maje….

Contemplating Suicide
I was sitting in the bedroom one day. There was a bottle of Dettol in the bathroom and a thought came, very strong, “Just drink it and die. What’s the point? The whole world is laughing at you right now. Just end it.”

Faith
The devil finds a way to fill your head with lies when you have just gone through a period. These lies can make you question everything, including the very purpose of your existence. Lies like:
‘You’re not good enough’
‘This is the best thing that could have happened to you and now it’s falling apart’

‘This will end you’
When this lies came, God’s word provided a much-needed comfort and a reminder of my identity and His plans for me.

Moving on and Healing
Maje hadn’t made it easy for me to move on. He’d begged like his life depended on me staying….
And then there were the outrageous comments:
‘Maje spent X amount of time with Anita so she wasn’t the mistress, Toke was’
‘She didn’t break your home, you did. You came between two people who loved each other by marrying him’.

…. That day’s topic was about making marriage work, and it hit me so hard that I cried like a baby. I wasn’t a virtuous woman; I was a girl! A girl with a daddy-void so large that she had all of her issues and expectations on a man who was still trying to discover his purpose.

While I’m not sure if I’ll find love again, I am sure of the contentment I have found in a God who’s got my back 100%.