Home Entertainment Meek Mill Post X-rated Photos leaving fans guessing if it’s Nicki Minaj...
The Year 2016 kicked off with various social media beefs and more also breakups of the century and as things seemed to be winding off and cooling down on the Breakup end. 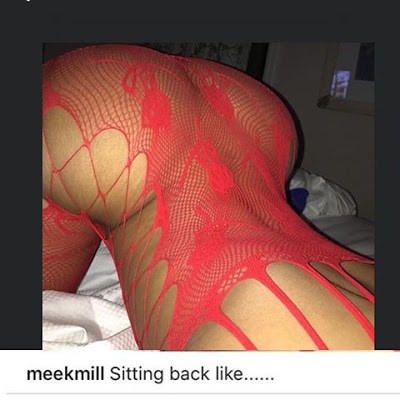 News broke last week about a possible breakup that we never saw coming and it was damm dramatic as Meek Mill and Anaconda Hitmaker Nicki Minaj called it quit on their  over a year long relationship that kicked off late 2014 after Nicki Minaj Broke Up with Ex Boyfriend Safree after 11 years relationship.

more revelations as surfaced since the split as both celebrities traded insults on social media, Nicki was first to post, saying :

“Thank God u blew it. Thank God I dodged the bullet. I’m so over u.
Baby good lookin out. #BestThingUNeverHad. (sic)”
The suspicious post lead to Meek deleting his Instagram account completely.

Meek then took to his social Media page to post the  above Photo of a ladies Booty , while captioning the Photo
“Sitting back like…… $avage… just friends,” he wrote.

Fans of both artist has expressed mixed reactions as some are claiming the breakup is not real or like its a celebrity stunt.

“They’re not following each other, omeeka is over, THANK U GOD!” one wrote.
Another who reckons it is Nicki shared: “He’s trolling y’all because he could easily put a picture up of them together but he decided to be petty.”

A third simply said, “This is not Nicki at all.”

If it is Nicki, it looks like Meek is shutting down the rumors once and for all.

Sources close to Nicki Minaj say, the 34-year-old Trinidad and Tobago rapper broke up the relationship because Meek Mill was cheating on her with a lady that owns a boutique and that same boutique was sponsored by Meek Mill.