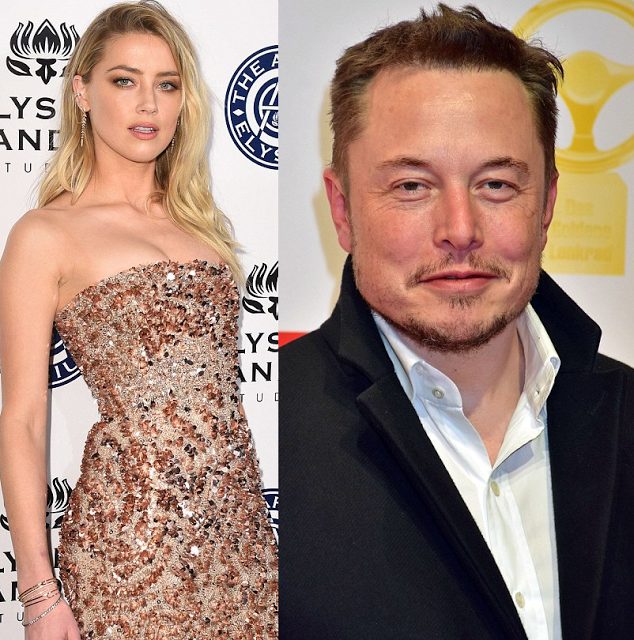 The ‘Rum Dairy’ and Magic Mike Star Actress was Enraged in a Divorce Battle with ex Husband Johnny Depp after accusisng the  Pirate of the Carribean Star actor of Abusing her.

The Divorce settlement took months to be resolved and after much deliberation an agreement was reached a few days ago.

Meanwhile , Billionaire  Elon Musk had been admiring and chasing the Hollywood Brunette for months.

According to the Mirror:

‘Amber is over the moon about her divorce but she is even happier about being able to go public with Elon. She was telling friends over Christmas how smitten she is with Elon.

‘They are already planning a lot of adventures together and she’s relieved she can move on with her life. It’s an exciting new chapter for both of them.’
Elon, who is reportedly worth  £9.2billion, was spotted in the company of Amber Heard multiple times in August amid reports the tech billionaire has had an interest in the newly divorced actress for years.

The Hollywood Reporter spoke with a source who claims that Musk ‘became infatuated’ with Heard after the two appeared in the 2013 film Machete Kills.

The duo did not have any scenes together or get a chance to meet on set, so Musk began to email director Robert Rodriguez repeatedly in hopes that he could set up a meeting between himself and the actress – despite the fact that she was with Johnny Depp at the time.

If there is a party or event with Amber, I’d be interested in meeting her just out of curiosity,’ Musk wrote in one email to Rodriguez.

‘Allegedly, she is a fan of George Orwell and Ayn Rand … most unusual.’
A dinner was then reportedly set up between the two, but Heard did not show up for her scheduled sit-down with the business magante.

That did not deter Musk however, who again emailed Rodriguez, writing:
‘Can you send her a note saying I would like to get together for lunch in LA?’
He then clarified what he was looking for, telling Rodriguez:

‘Am not angling for a date. I know she’s in a long-term relationship, but … Amber just seems like an interesting person to meet.’
Musk meanwhile is in the process of divorcing his wife Talulah Riley – again after divorcing in 2012 and re-marrying in 2013.

He announced on Twitter that it had been an ‘amazing’ few years and that he would always love her, paying out $4.2million in a settlement.