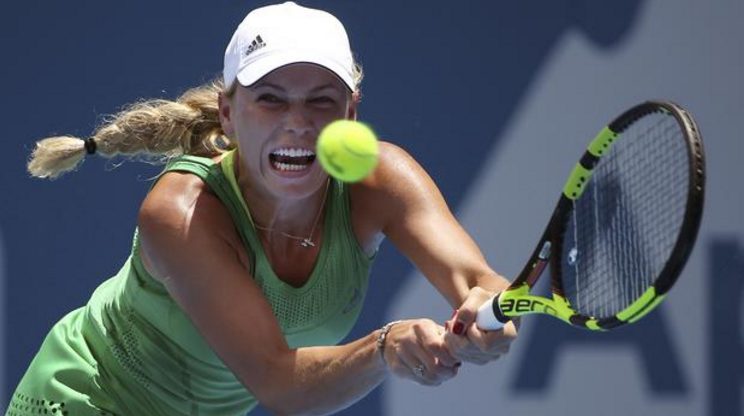 The Danish Player get her career back on track late lst year at the US Open when she reached the Semifinals losing to eventual Winner Angelique Kerber and later going on to win two more WTA tour titles before calling it a Year for 2016.
This year has kicked off well for her, but every year for the last Seven years she had not made it past the Quarterfinals at Sydney Internationals, losing once more on Wednesday.
According to AP, In temperatures reaching 40 degrees Celsius (104 degrees Fahrenheit) for much of the match, Wozniacki lost 7-5, 6-7 (6), 6-4 to Barbora Strycova in a duel that stretched to 3 hours, 19 minutes.
Both players were treated for foot injuries during a grueling second set at Ken Rosewall Arena. Wozniacki came back from 5-2 down in that set, and then 5-0 in the tiebreaker, to win it and force a third set.
“It was brutal out there … but you just try and think like you’re on a beach drinking pina coladas,” Wozniacki said. “That’s basically your train of thought. You know that it’s the same for both players, so I was just trying to mentally just try and keep cool.”
READ ALSO
Nollywood Actress Omotola Jalade-Ekeinde celebrates 3 million online followers with sweet video

In the semifinals, Strycova will play Agnieszka Radwanska. The second-seeded Pole beat Chinese qualifier Duan Yingying 6-3, 6-2.
Former Wimbledon finalist Eugenie Bouchard continued her strong start to the year with a 6-2, 6-3 quarterfinal win over Anastasia Pavlyuchenkova.
Bouchard had a breakout season in 2014, reaching the semifinals at the Australian Open and French Open before making the final at Wimbledon. But she has only gone past the fourth round at a major once since then and slipped to No. 46 at the end of last year.
“I feel more and more confident every day,” Bouchard said. “I feel like I’m getting back into the rhythm of things a little bit, but it’s a long road.”
Nicki Minaj reportedly dating Fetty Wap Amid Meek Mill split Rumors
The Canadian’s semifinal opponent will be Sydney-born Johanna Konta of Britain, who beat Daria Kasatkina 6-3, 7-5. Konta broke Kasatkina’s service in the 11th game of the second set, helped by a double-fault to set up break point in that game.
Last year at the Australian Open, Konta became the first British women to make a Grand Slam semifinal since 1983 before losing to eventual champion Angelique Kerber.
In men’s play in Sydney, two-time defending champion Viktor Troicki beat Paolo Lorenzi 6-3, 6-4, and second-seeded Pablo Cuevas of Uruguay defeated Nicolas Mahut of France 6-4, 2-6, 6-2.
In Auckland, New Zealand, John Isner narrowly avoided the fate of two former champions when he beat Malek Jaziri 6-3, 3-6, 7-6 (6) to make the quarterfinals of the ASB Classic.
Isner won his last three points with volleys at the net.
“The way I need to finish points is that if I can I have to try and finish them at the net,” Isner said. “I did that three times in a row and I’m very proud of that.”
Four former champions were scheduled to play second-round matches Wednesday but by the time the second-seeded Isner took the court, two had bowed out.
Defending champion and No. 1-seeded Roberto Bautista Agut was forced to withdraw before play began because of a stomach virus, handing Ruben Statham a place in the second round as a lucky loser from the qualifying rounds.
Jiri Vesely, the 2015 champion, was due to play Bautista Agut and thought he had caught a break when the Spaniard withdrew and the 434th-ranked Statham took his place. But Vesely had a tussle on his hands before winning 6-7 (6), 7-5, 6-3.
Four-time champion David Ferrer was first up on center court and lost 6-2, 4-6, 7-6 (4) to Robin Haase of the Netherlands. In a night match, fourth-seeded Jack Sock beat fellow American Ryan Harrison 7-6 (5), 4-6, 6-1.
At the WTA’s Hobart International, former French Open finalist Lucie Safarova was beaten 2-6, 6-3, 7-5 by Japanese qualifier Risa Ozaki. Ozaki will next meet Monica Niculescu.
Top-seeded Kiki Bertens advanced with a 6-1, 6-4 win over Galina Voskoboeva of Kazakhstan and Shelby Rogers defeated Lara Arruabarrena of Spain 6-2, 6-2.