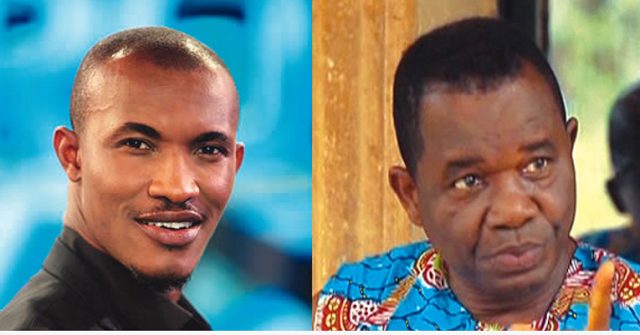 2017 is another year of beefs among Nigerian Celebrities, Last year don Jazzy and Olamide kicked of the Year on a beef level, this Year it continued in Nollywood as Tinsel actor, Gideon Okeke took a Jab at Veteran Nollywood Actor Chiwetalu Agu saying the Nolywood Igbo actor uses more vulgar words in his movies too often.

Which Sparked a reaction from the Veteran Actor whom said Nobody complained about his ethics in acting and has achieved more than the Tinsel actor can ever dream of. Chiwetalu even went on to say that he doesnt even know whom Gideon was.

According to Punch’s Sunday Scoop,Agu Said:

“Let him leave the censors board to do their job, or does he work with them? Anybody can say anything or come to whatever conclusion they please. The viewers would judge whether I use vulgar words in movies or not. People who watch movies are the ultimate judges. I do not even know who Gideon Okeke is; I do not think I have ever heard his name. If people like AMAA are talking to me about this, I would know how to react appropriately. But this is an individual I do not even know. He has his own style, and I have mine which has won me awards all over the continent and even beyond.”

“This is the first time anyone will be accusing me of vulgarity. Others have been hailing me. What we do is satire; we are re-enacting what happens in the society. People I have encountered and those who have called me have been full of praise for me. It will also interest you to know that I am the highest award-winning actor in Africa. I have 47 awards to my name; and the second person behind me has not even got up to 10 awards. Two years ago, I took two cows to church to celebrate and thank God for giving me the highest number of awards in Africa. Secondly, I have done 727 productions. It is a rare record in Africa. I am also the current holder of the Best Veteran Actor award which was given to me in Ohio, United States of America. People like Olu Jacobs and other time-tested Nollywood practitioners were nominated for that same award but I was chosen. My record is the best in all ramifications. I have spent about 35 years in the movie industry, and I am a big pillar of Nollywood.”


He further said he is appreciated by leaders all over the world. “Even former President Goodluck Jonathan confessed about three years ago that whenever he travels out of the country, foreign leaders ask after people like me, Jim Iyke, and Genevieve Nnaji. Because of that, he put N3bn into Nollywood’s account, and asked the former Finance Minister, Ngozi Okonjo-Iweala to manage the funds for Nollywood. This fund is still open to Nollywood practitioners. It goes without saying that I am very big in Nollywood. I am a father, legend, and icon,” he said.

Gideon Okeke earlier wrote, “You know him as the wicked uncle in films, but I need to check the sanity of my ears and mind whenever he comes on screen…the measure of liberty this actor enjoys from directors and producers to improvise vulgarities in movies is not funny anymore…hiding behind the pretext that not all your audience understands Igbo language is no excuse to throw all decorum out of the window…this is a case for the Film and Video Censors Board…” However, after several attacks from his fans, Gideon deleted the post.

5 Steps to maintain a healthy relationship

Johnson Olumide - November 20, 2018 0
Love is the glue that keeps relationships strong and healthy. A relationship is made up of many things, friendship, intellectual compatibility, sexual attraction and...

Violette - July 2, 2019 0
Chizoba Ajukwu a 25-year old lady has reportedly been arrested for prostitution – Ajukwu, upon interrogation revealed that she makes as much as N300,000...

Adedokun Moses - January 24, 2020 0
Popular Nigeria actress amd comedian, Wofai Fada is currently in Texas and she made sure she's the talk of the town as she storm...