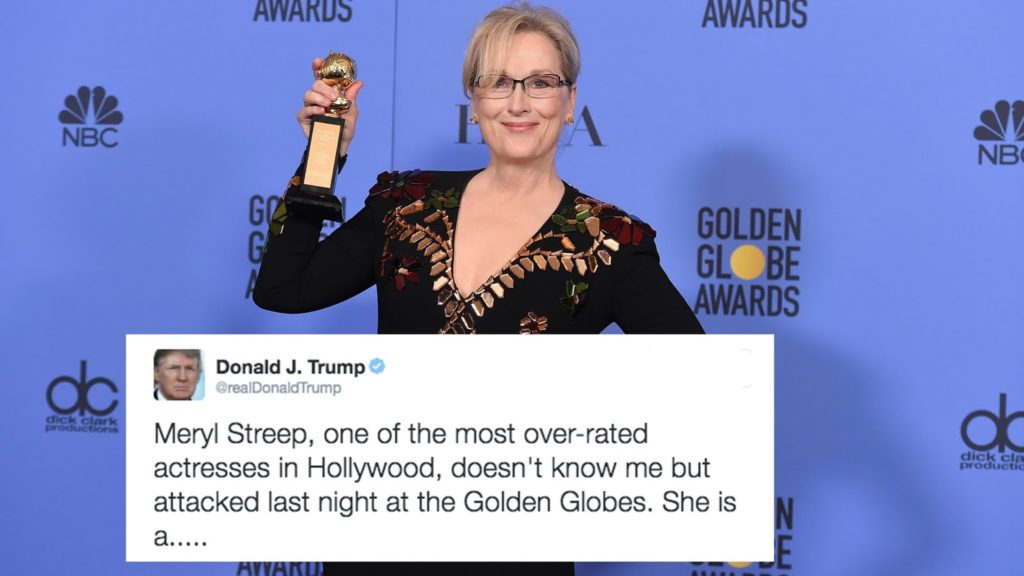 The President elect,Donald Trump of the United States of america is one lousy Personality, always having time to tweet and criticize via his social media page Particularly Tweeter.

Over the Weekend, The Golden Globes Award was Held in Beverly Hills, LA United States and Meryl Streep was given a life time achievement Award and during her acceptance speech took a Swipe at Donald Trump.

Of course you know he wont let go and went ahead to call Meryl Streep as one of the most over-rated Actresses in Hollywood.

Someone like Chris Evert a Tennis Legend would also not let this slide and hit back the PEOTUS in a stylish manner.

According to Baseline, Not long after U.S. president-elect Donald Trump tweeted that Meryl Streep is an “overrated” actress and “Hillary lover,” Chris Evert more or less used one of his debate-time tropes against him, tweeting, in part, “wrong again.”

Evert opined that “empathy and grace” are key to Streep’s longevity and her standing in American culture.

It wasn’t the first time that Evert had sharp words for Trump in a tweet. “Get over it,” she said one short month ago about his ongoing, largely tweet-based skirmishes with next to anyone and everyone.

NO…. Meryl Streep the Greatest actress of all time… A person with empathy and grace. Someone we all look up to and respect…wrong again https://t.co/lZjgMWRlFQ

That’s the Ice Queen: She doesn’t miss when making an authoritative backhand shot. Question is, how long until PEOTUS Trump reacts to her on Twitter?

For those thinking he won’t do so, remember that this is the man who gave Saturday Night Live the best free press of its more-than-40-year existence and name-dropped Rosie O’Donnell during a general election debate.
READ ALSO
WTO, Director-General, Dr Ngozi Okonjo-Iweala’s father , Professor Chukuka Okonjo, is dead