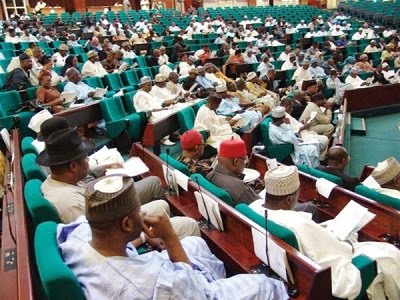 New Year, New Drama for Nigerian Politics, its been barely just 48 hours into the New Year and Drama has officially Resumed in the Nations Political Power Houses.

As Reported , The Jigawa House of Assembly officially Impeached its Speaker  Idris Garba and Elected Isa Idris of the Gwaram Constituency as the New Speaker for the House.

According to NAN( News Agency of Nigeria) the Deputy Speaker, Ahmed Garba, presided over the sitting attended by 23 members.
The Clerk of the house, Hussaini Ali, earlier announced that he received an impeachment notice signed by 25 of the 30 assembly members, and which he read on the floor of the house.
Mr. Ali disclosed that members of the assembly impeached the speaker due to alleged high handedness and abuse of power. The Deputy Speaker read the impeachment notice on the floor of the house, and confirmed the number of members that signed the notice.
Mr. Garba said that 25 of the 30-member assembly that endorsed the impeachment notice showed that it met the constitutional requirement of two third to impeach any of its principal officers.


Nollywood Actress Rukky Sanda- Yes I am happy & my life is perfect
“With this development, I hereby declare the seat of the Speaker vacant and a fresh election should be conducted to elect the new speaker,” he said.
NAN reports that two members – Isa Dutse of Dutse Municipal constituency and Isa Idris of Gwaram constituency– were nominated for the election to replace the impeached Speaker.
Isa Idris, however, defeated Isa Dutse with 12 to six votes, while five members were indifferent. In his acceptance Speech, the new Speaker promised to run an open door policy and solicited members’ support and cooperation.
READ ALSO
The Weeknd and his girlfriend go separate ways again

Violette - July 16, 2021 0
Veteran Nollywood actress and philanthropist, Tonto Dikeh has opened up on why she underwent surgery on her body compare to her former best friend,...

Johnson Olumide - April 30, 2018 0
According to a report from Diamond Celebrities, the 14 year old marriage of actress Rita Nzelu to Simeon Okoro has crashed. The report stated that the crash...

Violette - July 1, 2020 0
A popular rapper who is known as Phyno really warned the social media billionaire about his deals and actions. Many people who reacts to the...

Violette - December 5, 2020 0
Talented rapper and reality star, Laycon has continued his excellent return to the music industry after his triumph at the Big Brother Naija reality...