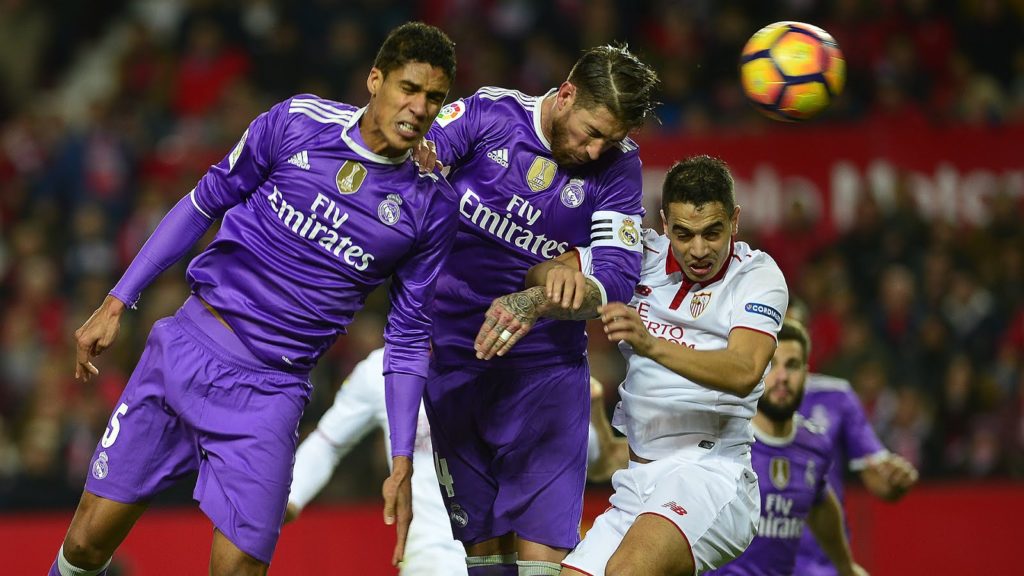 Prior to this Match there has been a Heated Atmosphere betwee n the Two clubs amid reports that Sevilla Fans Jeered towards  Sergio Ramos during their Lacopa Clash Midweek in which Madrid got Lucky with a 3-3 Draw via a Sergio Ramos Paneka Penalty Kick and also Celebrating towards the Home fans, while Benzema Snacthed a 90 minutes Equalizer to keep Madrid Unbeaten Run and reaching a New Record 40 Matches Unbeaten.

SCROLL DOWN FOR MATCH HIGHLIGHT

Things were going just fine for Madrid as they took the Lead midway through the Second Half as Ronaldo scored from the Spot Kicke after Carvaja was brought doen inside the Box.

The Game was turned on its head  5 minutes from time as Ramos turned in a Header into his own net, while man of the Match and New Signing Jovetic who came in the second half Curled home the winner for Sevilla  on 90 minutes sending the home Crowd into a Frantic Jubilation mode. 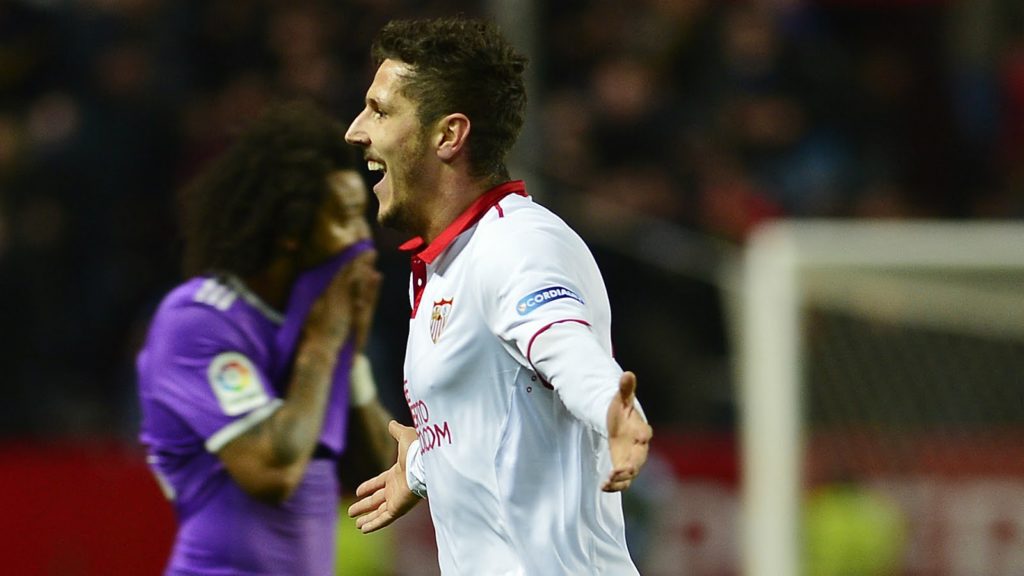 Sevilla could be called the Angel and Demon as they were the team that allowed Madrid Set a New Laliga unbeaten and also same team to end it.

According to Goal.com, The La Liga leaders were 1-0 up with five minutes of normal time remaining at the Ramon Sanchez Pizjuan, after Cristiano Ronaldo’s penalty broke the deadlock midway through the second half.

But Sergio Ramos’ own goal levelled matters and in stoppage time, Keylor Navas could only parry substitute Stevan Jovetic’s shot into the bottom-right corner as Madrid tasted defeat for the first time since a 2-0 loss to Wolfsburg on April 6.

Sevilla’s victory lifts them above Barcelona into second with Madrid a point ahead at the summit, having played one game fewer.

“We relaxed for five minutes and that was enough to let the win escape,” conceded Zidane. “It’s hard considering how the game went but that’s football.

“We managed for 85 minutes. We added another dynamic but lost focus for only five minutes.

“You have to accept the result. We know something could happen but we’ll use this as motivation for the next game. We knew it was logical that one day the unbeaten run would come to an end.

“I always said that the season until the end is tough. We were unfortunate with the own goal. But this can happen in football. I am very proud of my players.

“Sevilla have shown that they are contenders for La Liga. We will continue with the same work as we’ve done until now. We’ll analyse the game and see what needs to improve.

“I’m happy with the game but disappointed with our two mistakes. We aren’t going to change anything. It’s difficult to digest a loss but you have to relax and think about Wednesday [against Celta Vigo in the Copa del Rey] with a clear head.

“Sevilla played very well. They were intense in everything they did. Obviously we’re hurt. A defeat is never welcome here.”

Zidane also paid tribute to Ramos, who was the target for abuse from Sevilla fans in Thursday’s 3-3 Copa draw, responding by cupping his hands to his ears in celebration after converting a ‘Panenka’ penalty.

“I’m very proud of our captain, he played a great game,” Zidane said. “Own goals happen in football. He showed great personality.”