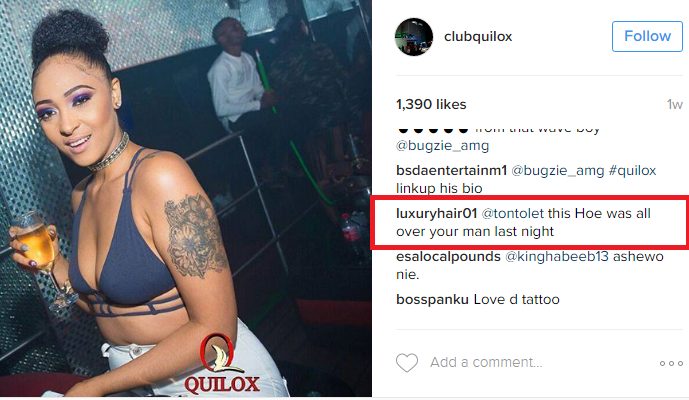 It been some weeks now into the year since the news broke on LIB that Nollywood actress tonto dikeh’s Mariage had hit rock bottom and the allergy was done by her Husband PA who happpens to also be an upcoming Nollywood actress called Rosaline Meurer.

It is irritating to the ears, it’s just like saying are you sleeping with your brother.

New Reveation has now surfaced as Photos of Rosaline Meurer and Mr Churchhill had been spottd on instagram after it was uploaded on Quilox Night Club official Instagram page.

According to Misspetiteniajablog,The comment I circled in red caught my attention, so I decided to scroll through and lo and behold,Tonto Dikeh’s husband Churchill was also at the club on the same day . 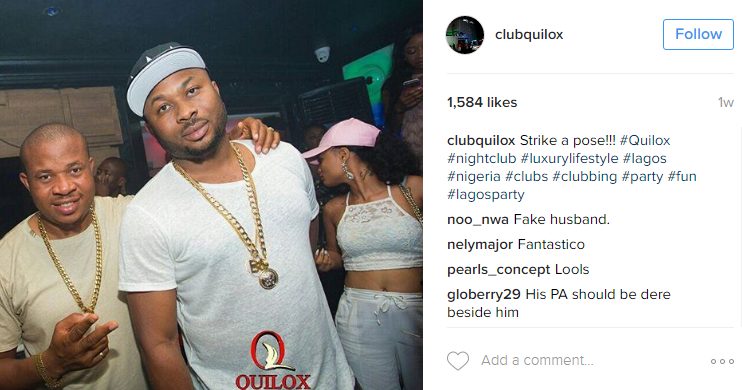 This is so so sad.She shouldn’t have bothered with that poorly scripted video rebuttal. The photos were posted a week ago, around the same time news of marital issues hit the internet.

Well,maybe PA’s follow their bosses or her mentor as she called him to nightclubs dressed like this..
See a photo of him below.

In her denial ,she told Hip Tv
It is irritating to the ears, it’s just like saying are you sleeping with your brother.

“I really have nothing much to say about this because it’s really irrelevant to me. They are in peace, they are happy, I don’t know about what you people are saying but you guys should get your facts straight before you bring such things out, it’s really not relevant to me. Generous person.I’m not going to say much about it. I remain to be under Big Church Foundation and he is family to me, his wife is family to me, we’ve hung out together before and I don’t see a big deal there; people should stop saying what they don’t know”,
On Tonto’s marriage,she said

They are all false, I don’t see why they aren’t false. Does anybody have proof of anything that their marriage is not right or what? There’s no proof of any of that, none of them is complaining, they are living their lives in their home. I don’t know why people will just bring up stories, it doesn’t make sense, I don’t know why people won’t mind their business and leave a happy family to be happy, just mind your business”, she said.
READ ALSO
#BBNaija: Ozo has ruined his chances with Nengi — DJ Kaywise

Johnson Olumide - August 31, 2017 0
NEW YORK (AP) — No one, not even Maria Sharapova herself, knew quite what to expect from her return to Grand Slam tennis at...

Adedokun Moses - January 27, 2020 0
With the world currently on mourning mood over the demise of sport legend, Kobe Bryant, and his daughter Giana, other victims of the helicopter crash had...

I Don’t Smoke Or Do Drugs” to Perform or write Hit Singles – Singer...

Johnson Olumide - April 26, 2019 0
Nigeria ace singer Adigun Akande Abolore Alapomeji popularly known as 9ice has said that contrary to the popular opinion about musicians, he as a...

I Love you my King!! – Actress Anita Joseph showers praise on husband (Photos)