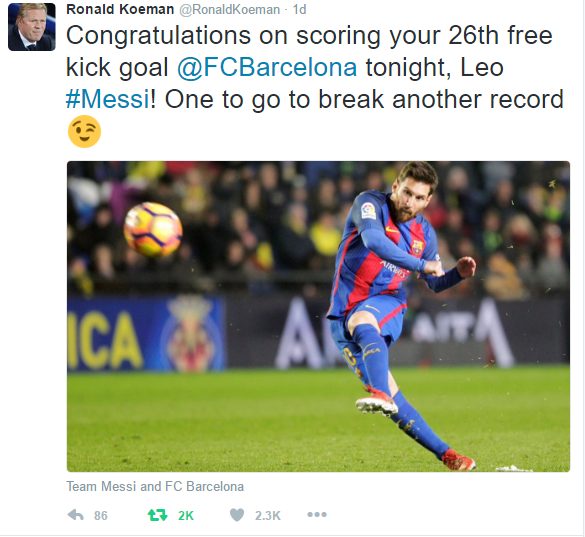 The Argentine Forward and FC Barcelona Star-man has become the first player in football history to score Three Free-kicks in Consecutive matches in 2017.

The 29-year-old Began 2017 scoring a Free-kick against Athletic Club in the LaCopa match last week Thursday in which they lost the First leg 2-1.

Then over the weekend in the La Liga on Sunday scored another late Free-kick to give Barcelona a point in a game the where shadows of themselves.

While once again on a night they needed their first win of 2017 he stepped up his game and curled home a stunning Free-kick in the 78 minutes to put the game between them and athletic Club to bed.

making it 3 Free-kicks from 3 games, the Everton Coach was full of praise for the Argentine player as he took to his twitter page to celebrate the best player in the Universe.

Congratulations on scoring your 26th free kick goal @FCBarcelona tonight, Leo #Messi! One to go to break another record ? pic.twitter.com/eaoS5e1dR7