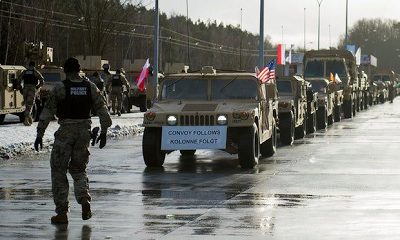 Dmitri Peskov Kremlin’s spokesman has issued an official Statement regarding the Actions of the United States Government sending 4000 US foot Soldier into Poland and Germany earlier this week calling it a threat to Russian Security.

Early this week, the U.S deployed 4000 troops and 2,400 pieces of military equipment that included tanks, armored fighting vehicles, artillery, trucks and containers to Russia’s European borders in Germany and Poland, an action U.S Military described as a clear ‘warning to Russia’, to prevent them from showing military superiority to ‘smaller’ European nations just like they did Ukraine.

Kremlin has now revealed that the increase of military presence of it’s neighbors by the U.S, that’s not even a European country is a threat to Russia’s well-being.
Christina Milian, 35, is the ultimate cougar as she is Currently Dating 19-year-old Model Izzy Lopez
“We see it as a threat to us. This is an action that threatens our interests, our security, moreover, this is a third nation (apart from Russia and Poland) that is increasing its military presence near our borders in Europe, and it’s not even a European nation.’ Kremlin spokesman Dmitri Peskov told journalists on a conference call on Thursday.

“One thousand or ten thousand — we’re talking about the increase of military presence. There’s nothing to add.”

Peskov also reiterated there should be more mutual respect between Russia and the US.

“President Putin with his actions and his statements has clearly and undoubtedly showed his readiness to respect our partners, but this respect can only be mutual, it cannot be unilateral.That’s why, of course, there should be more mutual respect in Russia-US ties, from our viewpoint, much more.”

“At least, Mr. Trump was talking about his readiness to have a dialogue. It does not mean a readiness to agree with each other on everything, that’s what Moscow does not expect, but a dialogue is what we should hope for in search of many complicated situations.”

The 4000 U.S Troops sent to Poland and Germany represent the biggest deployment of American forces in Europe since the cold war.