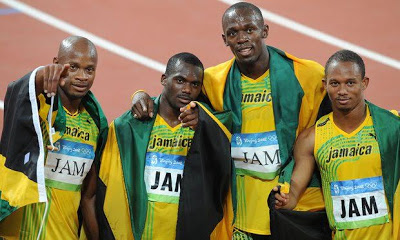 Usain Bolt the best athlete on the Track and Field event at the last 3 Olympic Competitions has been stripped of one of his nine Olympic gold medals after it was confirmed that his 4x100m relay team-mate Nesta Carter tested positive for a banned substance at the 2008 Beijing Olympics.

An anomaly was discovered in Carter’s submission following a decision by International Olympic Committee (IOC) to retest 454 doping samples from Beijing using the latest scientific analysis methods. It was found to contain banned stimulant, methylhexaneamine.

Carter was also part of the team that won the event in London in 2012. He ran the first leg for Jamaica’s 4x100m relay team in Beijing, which also included Michael Frater, Asafa Powell and Bolt. The team won in a then world record of 37.10 seconds, ahead of Trinidad and Tobago and Japan, who will now have their medals upgraded.

It was reported by Reuters in June that Carter’s A sample had been found to contain methylhexanamine, which has been on the World Anti-Doping Agency (Wada) prohibited list since 2004.

Bolt has not commented on the news, but in 2016 he said he would accept the IOC’s verdict if they stripped him of his medal. “It’s heartbreaking because over the years you’ve worked hard to accumulate gold medals and work hard to be a champion – but it’s just one of those things. Things happen in life, so when it’s confirmed or whatever, if I need to give back my gold medal I’d have to give it back, it’s not a problem for me.”