Home News Beyonce bares baby bump in golden Costume as she performed at the...

The 35 year old singer and mother of 5-year-old daughter Blue Ivy was all the mother kind in her golden Sexy and Seductive Costume as she Performed for the First Time since announcing via social media that she was Expecting Twin babies.

According to Dailymail, The first image of the bump was a video montage as she performed a nine minute medley of Love Drought and Sandcastles from her Lemonade album, while wearing a bejeweled bikini top and bottoms

The hitmaker showcased her belly in a sequin gown and yellow cape next while sporting a crown.

The montage ended as Beyonce rose out of the floor, still sporting her sun ray inspired crown.

She took a seat in a chair, her cleavage on show in the plunging neckline.
However, there were some acrobatics as her wooden chair dipped back, sending the pop sensation parallel with the floor.
She brought the  audience to their feet for a standing ovation as she blew a kiss to the hundreds in attendance.

Meanwhile, sitting in the audience was her daughter Blue, who was on Jay Z’s lap next to Solange.
Announcing Bey’s performance, was her mother Tina Knowles, who spoke proudly of her famous daughter.

However, the both Tina and Blue were featured as holograms during the show.

Pregnant pop superstar Beyonce headed into the Grammy awards aiming to clinch her first album of the year win, while riding high on a wave of goodwill that greeted her surprise announcement that she was expecting twins.
The biggest night in the music industry marked her first public appearance since the singer announced her pregnancy on Febuary 1 with a message and an elaborate photo shoot proudly displaying her baby bump that broke social media records.

In a live show as much about spectacle as trophies, Beyonce’s appearance on the Grammy stage was the highlight of the ceremony.
Other performers at the three hour show included Katy Perry, Lady Gaga, The Weeknd, Bruno Mars, Adele, Demi Lovato, best new artist winner Chance the Rapper, A Tribe Called Quest, Carrie Underwood, Alicia Keys and Sturgill Simpson.

Beyonce came into the show with a leading nine Grammy nods for Lemonade, her powerful visual album about race, feminism, betrayal and empowerment.
The R&B singer competed head on with Britain’s Adele, the only other artist to be nominated for all three top awards – album, song and record of the year – for her comeback release 25. 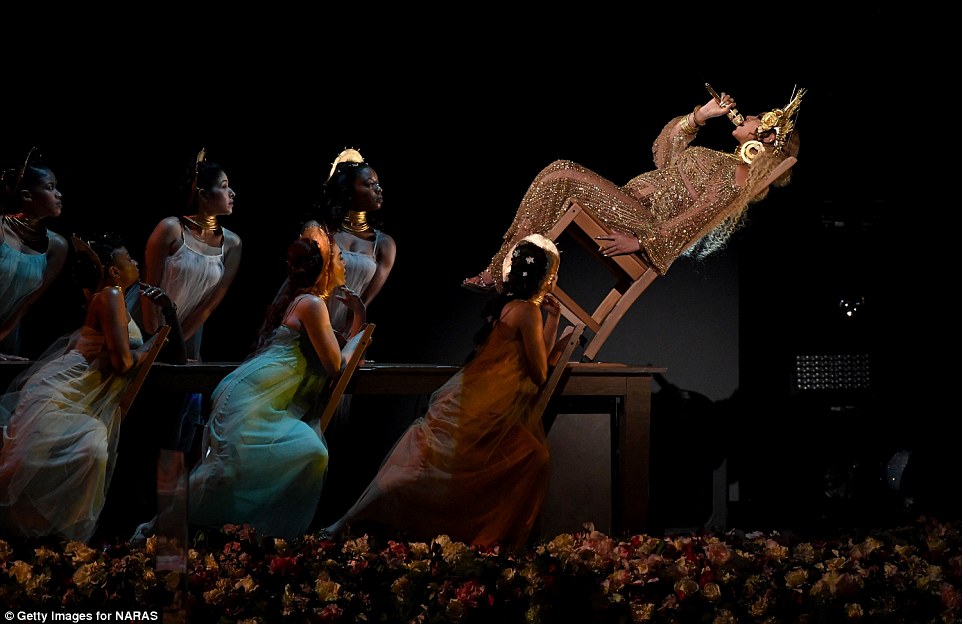