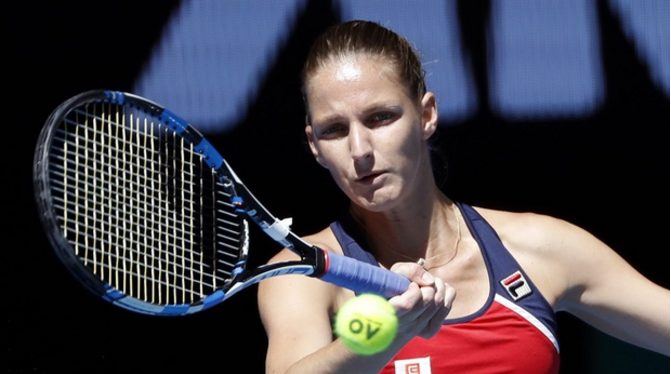 The 2016 Us Open Runner Up was back to her best at the WTA Dohr Competition as she wins her second and a record 8th singles career title after Defeating Wozniacki 6-3, 6-4 in straight set to clinch the title.

According to AP, DOHA, Qatar (AP) — Karolina Pliskova beat Caroline Wozniacki for the first time and won their Qatar Open final 6-3, 6-4 on Saturday.

Wozniacki won all three previous encounters in 2013 and 2014, but couldn’t hold a rally with Pliskova in the final and dropped her first sets of the week.

Pliskova won her second WTA title of the year, after Brisbane in January, and the eighth of her career. The Czech will remain No. 3 in the world rankings.

“I was waiting for a good result here because I lost three years in a row in the first or second rounds, so big step,” Pliskova said. “I’m excited to get the trophy, and finally get some new fans here.”

“Karolina was playing really well, she deserved this one,” Wozniacki said. “But I’m going to try and get my revenge next time.”

The second-seeded Pliskova broke Wozniacki twice in charging to 4-0. The Dane fought back to trail 4-3, but lost her serve again to lose the set.

The second was much tighter. They went serve for serve until Wozniacki, on serve, fell behind 15-40 in the 10th game, and lost the first match point.