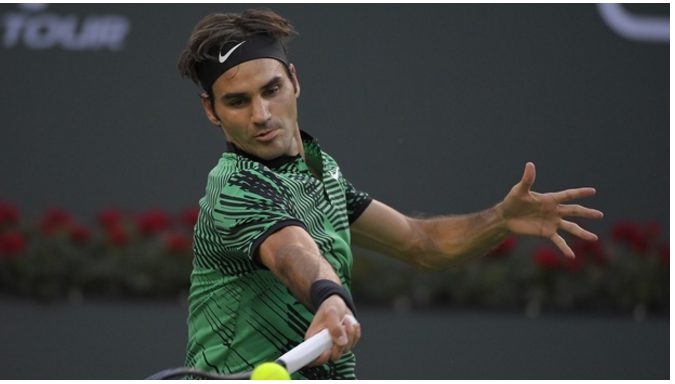 INDIAN WELLS, Calif. (AP) — Roger Federer defeated Rafael Nadal 6-2, 6-3 at the BNP Paribas Open on Wednesday in a fourth-round match that saw the longtime rivals meeting much earlier in a tournament than usual.

Federer broke Nadal four times in advancing to the quarterfinals in just over an hour. Although Nadal owns a 23-13 lead in their series, Federer has won the past three in a row, including an epic comeback in the Australian Open final two months ago.

Federer broke Nadal to open the match in front of a packed Stadium 1 crowd. Federer faced just one break point on his serve in the match, but he recovered with a big serve and two winning backhands to go up 2-0 in the first set.

“The main thing he take the break in the first game, and I had break point in the next game and come back and he had a good serve,” Nadal said. “When Roger has the advantage, his serve is so good, he has a lot of confidence with his serve, he’s able to play much more relaxed.”

Nadal wasn’t too shabby either, serving three love games. But Federer’s shotmaking was superb, frequently kissing the lines off both sides.

The four-time Indian Wells winner was crafty, too. Leading 5-1, Federer moved in quickly on Nadal’s second serve, surprising the Spaniard, whose forehand sailed long. Federer’s drop shots were well-timed and even when a scrambling Nadal got to them in time, Federer answered with one of his 26 winners.

The two superstars hadn’t played each other before the quarterfinals of an event since 2004 when they met in the third round at Miami. Wednesday’s match was just the fifth time they weren’t opposing each other in a final.

I signed four producers before I even signed an artist on my Label –...

Ifeoma Ngozichukwu - December 4, 2021 0
Nigerian Singer, Wizkid talks about understanding the business side of music in a recent interview. The singer revealed he signed four producers before signing any...

Johnson Olumide - June 27, 2018 0
The singer has unveiled his own company called Sound God Music Group and according to his team, the label is a full-on 360 music and entertainment...

Johnson Olumide - February 17, 2020 0
The Former Arsenal and Fc Barcelona Player whom dazzled us for many years with skills beyond comprehension has retired officially as a player and...

Violette - July 17, 2021 0
Legendary American entertainer Biz Markie has passed away at age 57 from long-term diabetes complications. According to TMZ, who reportedly spoke with a family source,...

Violette - December 15, 2020 0
Multiple award-winning afropop singer and songwriter Wizkid is back in Nigeria after a long time and he has ensured that is third son, Zion,...