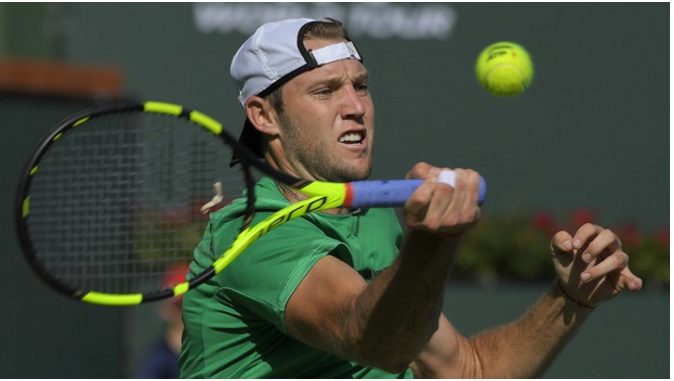 INDIAN WELLS, Calif. (AP) — Jack Sock is getting quite the workout at the BNP Paribas Open, with all four of his matches stretching to three sets on his way to the semifinals.

The 24-year-old American notched his biggest singles victory yet with a 6-3, 2-6, 6-2 quarterfinal win over Kei Nishikori on Friday. Sock finally broke through against a top-five ranked opponent after losing his first seven matches against such competition.

“The doubters in the past can’t really say much anymore,” he said. “I actually feel almost stronger as the tournament has gone on.”

Sock will need to keep up his strength for his semifinal against four-time Indian Wells champion Roger Federer. He lost to Federer in straight sets in the fourth round of the 2015 tournament.

Federer advanced when Nick Kyrgios withdrew with what the Australian suspected was food poisoning.

No. 14 Elena Vesnina advanced to the women’s final with a 6-3, 6-4 victory over 28th-seeded Kristina Mladenovic.

Vesnina raced to a 5-0 lead in the first set and then dropped three straight games before serving out the first set. In the second set, she built a 5-1 lead and again lost three games in a row before closing out the victory on her serve.

Vesnina beat No. 2 Angelique Kerber in the fourth round and No. 13 Venus Williams in the quarterfinals. At age 30, she has reached the biggest final of her career.

“In doubles I won three times title here and singles it was just not going this way,” Vesnina said. “So finally, this year, after all these years, I’m in the final.”

Vesnina will play No. 8 Svetlana Kuznetsova in an all-Russian final on Sunday. Kuznetsova beat No. 3 Karolina Pliskova 7-6 (5), 7-6 (2). At 31, Kuznetsova, a two-time major champion, is the oldest player left in the women’s draw.

“I was looking to defend good because I know I can move good. It’s very hard to overpower here,” Kuznetsova said. “Definitely my serve helped me.”

Sock improved to 15-2 and has won titles at Auckland and Delray Beach, Florida, this year. He is the top-ranked U.S. men’s player.

Sock overcame four match points against 12th-seeded Grigor Dimitrov in the third round and was two points from losing against Malek Jaziri in the third set before he pulled out a 4-6, 7-6 (1), 7-5 fourth-round victory.

Nishikori had not dropped a set in the tournament until losing the first against Sock. Nishikori, ranked fifth, had won seven straight matches against American opponents.

“I was having really tough time with my return, missing a lot, and giving him a lot of short balls,” Nishikori said. “He was attacking really well, first and third sets. Little, lazy mistakes for me. Too many unforced errors, especially in the third to give him too many chances to break.”

Federer got an unexpected day off after Kyrgios withdrew less than two hours before they were to take the court. The Aussie tweeted that he “had a restless night of being sick.”

He said “to play a great champion like Roger, I need to be at my best to have a chance.”

Kyrgios’ withdrawal spoiled the highly anticipated match with Federer. Neither player had dropped serve in the tournament and their only other meeting was decided in three tiebreakers at Madrid in 2015.

“I was really looking forward to playing the match,” Federer told fans waiting for the match on stadium court. “It’s a pity.”

Kyrgios beat No. 2 Novak Djokovic in the fourth round, while Federer routed rival Rafael Nadal.

“I’m playing great tennis and I didn’t expect it because I’m still on the comeback,” said Federer, who won his record 18th Grand Slam title at the Australian Open in January after being sidelined by various injuries for much of 2016.

READ ALSO
I Can Never Love One Woman – Wizkid Discloses

Federer, a four-time winner at Indian Wells, also advanced via a walkover in the quarterfinals in 2008.

Top-ranked Serena Williams withdrew before the tournament began with what she said was a knee injury that will also keep her out of the Miami event next week.

Johnson Olumide - October 6, 2019 0
This years edition of the reality TV show, Big Brother Naija has come to an end with it's glitz and glamour. Five housemates went into...

Johnson Olumide - June 18, 2021 0
Nigerian Singer, Olamide announced via his social media platform that his new Album titled Uyi Scuti is ready and would be released on June...

Violette - November 21, 2019 0
Actress Lilian Esoro radio personality Toke Makinwa has taken to their status as a means of communication as they stylishly throw shade on their...